He grew up just a few blocks from the School of Law’s new building, part of a family of attorneys and public servants. But when he left Columbia at 16, Robert R. “Richie” Gergel never imagined law school would be the reason he returned. Now in his second-year at the University of South Carolina School of Law, Gergel says he may have taken the nontraditional route, but his passion for justice has always been evident.

It’s a passion that took him coast to coast, beginning his undergraduate studies in film at the University of Southern California. He later transferred to and graduated from New York University after studying journalism and documentary filmmaking. The next eight years were filled with projects and experiences that he says would later prove irreplaceable in law school.

Gergel earned a master’s degree in journalism from Columbia University and went on to work as an investigative reporter and producer for network names like CNN, NBC News, and VICE.  He directed documentaries about poverty and education, two of which took place in his home state.

And when he decided law school was the next step, he said finding a place where his experiences would be seen as an asset was key.

“I struggled with the idea moving to a new city, going back to school and pursuing a new career path. As an older student, I had already been living and working in the real world for eight years. I didn’t want to go somewhere and start my entire life over again. UofSC Law felt like a welcoming place. There seemed to be a community.”

Receiving the Mortimer Caplin-William Hubbard Scholarship is what he says solidified his decision. Not only did the scholarship offer welcomed financial help, but it showed him that the faculty and alumni at South Carolina Law valued students with a diverse background, one where he would fit in.

“There is something intangible that comes with a scholarship offer — its a signal that the school appreciates your accomplishments and is willing to do what it takes to get you there. That is a powerful message that made it easy for me to see myself at Carolina.”

Since arriving, Gergel hasn’t skipped a beat. He is a proud member of the Mock Trial team and was inducted into the Moot Court Bar after making it to the final round of the Kate Bockman Memorial competition, where he was awarded Best Draft. He’s worked as a judicial intern at the United States District Court for the District of South Carolina, as well as a summer associate at Yarborough and Applegate in Charleston.

While he says he’s still not entirely sure where he’ll end up after law school, he’s realized how many places it can lead. His main goal remains the same, as both a journalist and future attorney.

“I’ve always been drawn to stories that have a social justice angle or exposed wrongdoing and try to hold people accountable. I want to feel like I am doing something that makes a difference in people’s lives.”

Gergel says he knows that South Carolina Law will help him achieve that goal. For now, he’s enjoying all that he has left to learn and soaking up all of the experiences his fellow classmates bring with them. 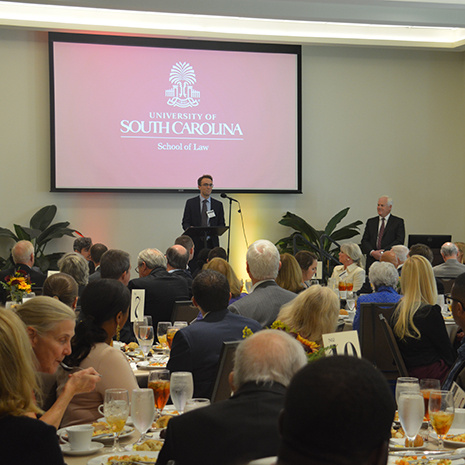 Richie Gergel '19 spoke at the 2017 UofSC Law Scholarship Luncheon about how receiving the Mortimer Caplin-William Hubbard scholarship helped make South Carolina Law a reality for him.

Interested in creating a scholarship to provide future students with an outstanding legal education? Contact Sarah Hughes, senior director of development and alumni relations at (803) 777-7207 or snhughes@law.sc.edu.