On Thursday, Sept. 14, the University of South Carolina School of Law dedicated its new building during a ceremony that also celebrated its 150th anniversary. U.S. Supreme Court Associate Justice Samuel A. Alito delivered the keynote address, reflecting on the building’s architecture, as well as encouraging those in the legal community to practice political conversations and to “think like a lawyer.”

“Lawyerly thinking in our country is closely in touch with the real world with all its messiness and ambiguities and surprises. Our legal culture rests on the foundations of the common law, which grew bit by bit from actual controversies between actual parties. It sprang from facts on the ground. It featured a bottoms-up approach. General rules grew up out of specific decisions, not the other way around. Our Constitution reflects this approach to the law,” said Alito.

The more than 600 people in attendance sat outside the law school’s new home on Senate Street and heard from legal giants at all levels. Chief Justice of the South Carolina Supreme Court Donald W. Beatty ’79 and Former President of the American Bar Association and Board of Trustee member William C. Hubbard ’77 also delivered remarks.

Classes were cancelled for the day to allow students, faculty and staff to attend the dedication. Speakers used the opportunity to encourage students in their decision to attend South Carolina Law, as well as practice in the state.

“You should know when entering the University of South Carolina School of Law, you are entering one of the best institutions and facilities in the country,” said Chief Justice Beatty.

Gov. Henry McMaster ’73, reflected on the beginnings of the new building, and the future it now has within the state and nation.

“The people who practice the law, teach the law, study the law, write the law, judge the law, enforce the law and obey the law make our state great,” said McMaster.

Dr. Harris Pastides, president of the University of South Carolina bestowed the title of honorary Gamecock upon Justice Alito, upon the tongue-in-cheek condition that Alito shout “Go Gamecocks!” from the Supreme Court bench. Columbia Mayor Steve Benjamin also honored Justice Alito, presenting him with a key to the city and citing the purposeful location of the new building along the state’s legal corridor.

Dean Robert M. Wilcox delivered welcoming and closing remarks, reinforcing the duty the School of Law has to the legal community.

“Our history is important and I believe our graduates’ achievements are worthy of this building.  But what matters most today is how we use the next 150 years. The dedication of this building commands our unwavering commitment as students, staff, faculty, alumni, and friends, to make the most of the opportunity this facility provides for us to achieve even greater excellence.”

October 7 will mark the official 150th anniversary of South Carolina Law, when the first law class of two students met in the South Caroliniana Library. The new building is the fourth home built specifically for the School of Law since its beginnings in 1867, but notably it is the first to have its name carved in stone across the entrance. The new law school building provides welcoming public spaces and social areas not found in prior law school buildings. These spaces not only add new opportunities for interaction among faculty, staff, and students, but will allow judges and lawyers to use the building and to meet informally with students outside of class. It was inspired by the work of 19th-century South Carolina architect Robert Mills, featuring a limestone and brick exterior. Students, faculty, and staff moved into the building at the end of May.

Take a virtual tour of the new building. 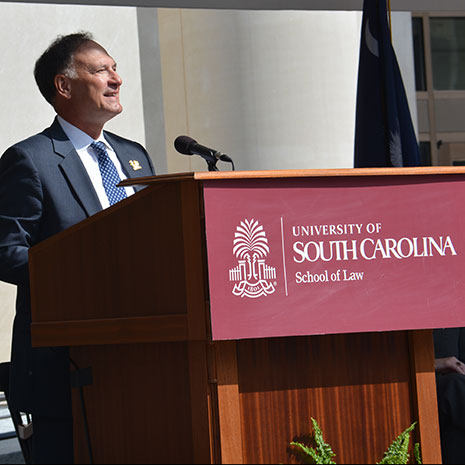 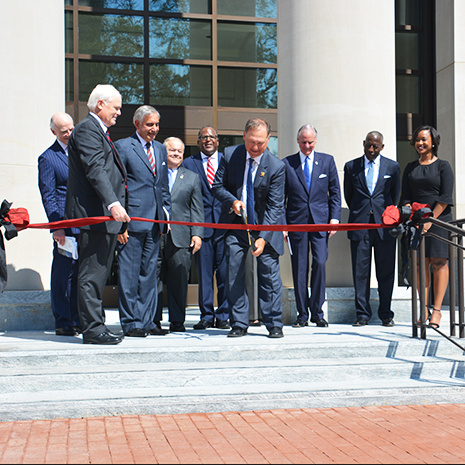