Judge Dennis W. Shedd assumed senior status at the end of the day on January 30, 2018, stepping down as an active judge of the United States Court of Appeals for the Fourth Circuit after 15 years of service on the court.

President George W. Bush nominated Judge Shedd to the Fourth Circuit Court of Appeals on May 9, 2001, to a seat vacated by Judge Clyde H. Hamilton. Following confirmation by the U.S. Senate, Judge Shedd received his commission on November 26, 2002. Prior to joining the Fourth Circuit, Judge Shedd served as a U.S. District Judge for the District of South Carolina for 12 years, having been nominated to the district court by President George H.W. Bush.

On January 30, Judge Shedd joined Judge Paul V. Niemeyer and Judge William B. Traxler, Jr., on a Fourth Circuit panel to hear oral arguments at the University of South Carolina School of Law. The special session was held in the Karen J. Williams Courtroom, named after a former colleague of the panel members.

Judge Niemeyer began the session by extending the thanks and appreciation of the court to Judge Shedd. “You can always count on his steady eye, his clear thinking, his decisiveness, and his foundational moral precepts in his decision making.”

Following the court session, South Carolina Governor Henry McMaster presented Judge Shedd with the Order of the Palmetto. The award is the State of South Carolina’s highest civilian honor and is given to citizens of the state to recognize extraordinary lifetime service and achievements of national or statewide significance.

Governor McMaster recalled first meeting Judge Shedd when he was an administrative assistant to U.S. Senator Strom Thurmond. “He was a ball of energy. He still is.

“His career has been defined not only by excellence but by inspiration to other people.”

In presenting the award, Governor McMaster stated, “It is a privilege for me to be able to recognize, on behalf of the five million people of South Carolina, one of our own who is among the very best we have to offer. He has had an enormous impact on the people and the future of our state.”

Dean Wilcox recognized Judge Shedd’s service as an adjunct professor with the law school. “It is a wonderful honor for our students to have the opportunity to study under someone who has been on the court for a number of years and has such high standards and such love for students.” He described Judge Shedd's approach in the classroom as one that emphasized high standards, diligence, and hard work.

Judge Shedd offered his thanks to everyone present. “It means a lot to come from South Carolina. Great state, great people.”

Judge Shedd will continue to serve the appellate court based in Richmond, Virginia, as a senior judge.

Judges appointed under Article III of the Constitution may retire or assume senior status when they attain specific age and service requirements as provided under federal law.

This article was originally posted here. 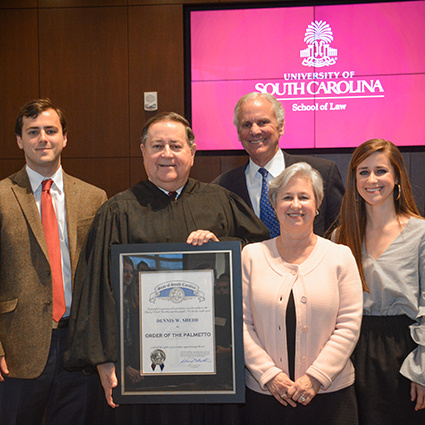 Gov. Henry McMaster presented Judge Shedd with the Order of the Palmetto. The award is the State of South Carolina’s highest civilian honor and is given to citizens of the state to recognize extraordinary lifetime service and achievements of national or statewide significance.