For years, the School of Law's commencement ceremony on the historic Horseshoe has officially kicked off graduation weekend at the University of South Carolina. During this year's ceremony on May 10, speaker Harry M. Lightsey III imparted the story behind how that came to be.

Lightsey, a 1981 alumnus, is also the son of Harry Lightsey Jr., the former dean of the law school from 1980 to 1985.  Lightsey told how there used to be a combined ceremony for the entire university.  Of course, the undergraduate portion could take hours, and many law graduates would get tired of waiting and simply leave before it was their turn to walk the stage.

Dean Lightsey struck a bargain with then-President James Holderman that if every law student remained for the 1981 commencement ceremony, the School of Law could earn its own separate ceremony in future years.

"Our class stayed through the entire long, drawn-out event, and at the end, we stood and applauded as the president and the dean recessed," said Lightsey. "Since that time, the law students have had their own graduation.  You're welcome."

Lightsey, who worked for BellSouth, AT&T, and General Motors over the course of his career, went on to share the dramatic changes that came about in both the telecommunications and the automobile industries and the key to finding success during such dramatic changes.

He recalled being in the room when AT&T CEO Randall Stephenson held up a prototype of the first iPhone, one of only two in existence, and predicted that it would change the world.

Of course, smart phones are now ubiquitous, and Lightsey pointed out that today's cars are becoming so computerized, they could be considered "moving smart phones," with the ability to drive and park themselves, avoid dangers invisible to passengers, and eventually feature headlights that project animated points of interest that can be tailored to the drivers' interests.

There is no way to know what the future will hold, said Lightsey, which is why it is so important for today's lawyers to take advantage of the thinking skills honed during law school -- so they can be flexible to change and open to every possibility.

"My advice to you today is this: As change occurs, be empathetic. Listen. Use what you've learned to make others' lives better. Remember: The law should be like the oil in the machine.  It should remove friction. Not add to it," said Lightsey. "As lawyers, you'll be asked to give advice on the impact of change. Listen to what is really being asked, and then be bold enough and brave enough to respond with honesty and integrity. I know you will."

Harry M. Lightsey III retired as executive director for Emerging Technologies Policy at General Motors in 2019, having served in that position since September 2016.  He joined GM in March of 2012 as the director of federal affairs for OnStar, Infotainment and Strategy Development.

Prior to GM, Lightsey spent 26 years in the telecom industry, holding a variety of positions in the external affairs and legal departments, first at Southwestern Bell and then BellSouth Telecommunications, Inc. He eventually became the South Carolina state president of BellSouth before moving to AT&T, where he retired in 2009 after serving as president of the Southeast region and as its senior vice president of legislative and external affairs.

In 2002, he received the Order of the Palmetto, South Carolina’s highest recognition for his achievements in leading the ground breaking effort to establish research and development programs in higher education. He has also served on the Princeton National Alumni Executive Board and on the Board of Trustees of the College of Charleston. 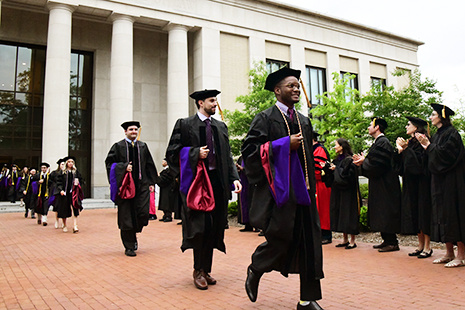 Watch our video from the May 10, 2019 Commencement Exercises on the historic Horseshoe.

View and download commencement photos from these two galleries: