The University of South Carolina School of Law welcomed 217 new first-year students into the Class of 2023 on August 17.  The class is one of South Carolina Law’s most academically talented, meeting or exceeding all of its metrics over last year, despite what has arguably been one of the most challenging admissions cycles in recent memory.

With 1398 prospective students applying to South Carolina Law for their legal education—a 4.7 percent increase over 2019—the school more than doubled the national average increase  (less than 2 percent) in applications and applicants.

South Carolina Law was also able to raise its median LSAT and GPA scores to 156 and 3.51 respectively, continuing the trend of improving the entering class’ academic profile every year since 2016.  And for perhaps the first time in school history, female students outnumbered male students 112 to 105.

A full two-thirds of the Class of 2023 are South Carolina residents, up from just 52 percent last year, attributable in part to a combination of last year’s sizable tuition reduction for in-state students and the pandemic-related trend of studying closer to home.

“There’s no doubt the uncertainty surrounding the coronavirus was a major factor for students this year,” says Karen Reagan Britton, assistant dean for admissions.  “However, our careful and deliberate efforts to ensure that the student experience would not be compromised gave our admitted candidates confidence that this law school had their best interests at the center of its planning.  As a result, remarkably few of our admitted candidates altered their enrollment plans this summer.”

Members of the entering class call 21 states their homes; they come to South Carolina from as far away as Alaska and Rhode Island. They also attended 80 undergraduate institutions across South Carolina, the region, and the country.

The class reported 56 academic majors in their undergraduate studies. The traditional majors of English, History, and Political Science were well represented, as were majors in various business disciplines (Economics, Finance, Marketing, Management), International Studies; the sciences (Biology, Chemistry, Geology) and in the engineering disciplines (Environmental, Industrial, Marine, and Mechanical Engineering). Several class members bring the benefit of advanced degrees and notable careers to the classroom here.

The entering class was selected from applicants who live in 46 states, the District of Columbia, and three provinces in Canada. 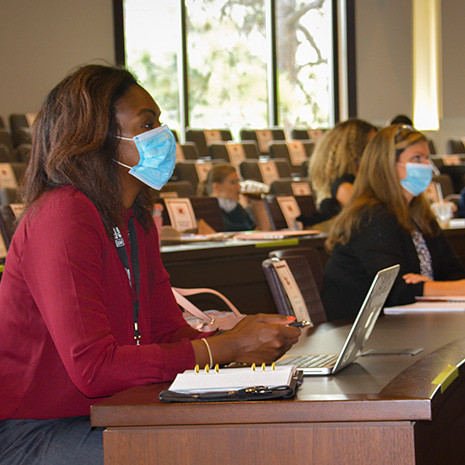 Orientation for the School of Law Class of 2023 began on August 17.  Following university protocols, students wore masks and practiced physical distancing for all in-person sessions.