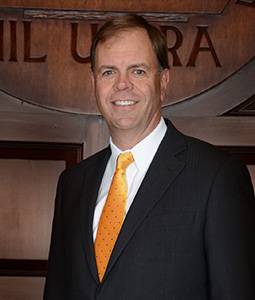 Justice Few was born and reared in South Carolina. He attended college at Duke University, where he served as Duke’s athletic mascot — the Blue Devil — during his junior year. John graduated from Duke in 1985 with an A.B. degree in English and Economics.

He then attended the University of South Carolina School of Law, where he was a member of The Order of Wig and Robe and The Order of the Coif. He also served as Student Works Editor of the South Carolina Law Review. He received his Juris Doctor degree in 1988.

Justice Few began his career as a law clerk to a federal district judge and then became a trial lawyer, a trial judge, and the Chief Judge of the South Carolina Court of Appeals.