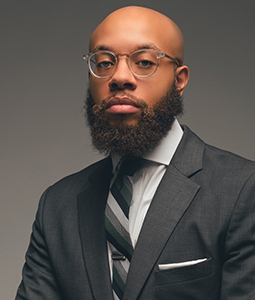 Etienne C. Toussaint is an Assistant Professor of Law at the University of South Carolina School of Law. He teaches Contracts, Business Associations, Secured Transactions, and other courses related to business law, political economy, and critical theory.

Professor Toussaint is a critical legal histories scholar of political economy, political theory, and intellectual history. With a focus on urban communities in the United States, he has written about the privatization of public good through social impact investing, the promise of the solidarity economy for equitable community development, the ritualization of white supremacy and harm to human dignity in segregated Black American communities through fair housing initiatives, and the structural extermination of marginalized citizens from urban landscapes through neoliberal urban farming programs. His articles have appeared or are forthcoming in the California Law Review, the Harvard Environmental Law Review, the Columbia Human Rights Law Review, the Michigan Journal of Law Reform, and the Houston Law Review, among others. He has also written essays for the Virginia Law Review Online, Current Affairs (print edition), and the ABA Human Rights Magazine (print edition), among other online and print publications.

Prior to joining the law faculty at the University of South Carolina in 2021, Professor Toussaint taught Contracts, Business Organizations, and Law & Economy at the University of the District of Columbia, David A. Clarke School of Law. He also taught housing finance and transactional lawyering as Co-Director of the Community Development Law Clinic at UDC Law, where he supervised the pro bono representation of small businesses, nonprofit organizations, and cooperative housing associations across the nation’s capital. Professor Toussaint began his legal career as a project finance associate with the international law firm Norton Rose Fulbright US LLP. Subsequently, he served as a Law & Policy Fellow with the Poverty & Race Research Action Council in Washington, D.C., a nonprofit civil rights advocacy organization focused on racial justice, fair housing, and poverty alleviation in America. Toussaint began his law teaching career as a Friedman Fellow at The George Washington University Law School, where he earned an LL.M. in Advocacy under the mentorship of Professors Susan R. Jones and Phyllis Goldfarb.

Professor Toussaint is a graduate of The Massachusetts Institute of Technology. At MIT, he earned an S.B. in Mechanical Engineering, and was designated a Ronald McNair Scholar and Alpha Phi Alpha Distinguished Collegiate. He completed an M.S.E. in Environmental Engineering from The Johns Hopkins University, where he served as Graduate Student Adviser for Engineers Without Borders. Toussaint earned his J.D. at Harvard Law School, where he served as a student-attorney in the Transactional Law Clinic, the Ghana Human Rights Clinic, and the Harvard Defenders. At HLS, he also served as an editor of the Harvard Environmental Law Review, Vice-President of the Board of Student Advisers, and as a National Executive Board member of the National Black Law Students Association.

Toussaint previously served as a Board Member of the Washington Council of Lawyers. He was recently appointed to serve a one-year term on the American Bar Association Commission on Homelessness and Poverty. He is the proud husband of Ebony Toussaint, Ph.D., and the father of two amazing sons.