A career in nursing wasn’t always the plan for Dale Barwick. She began her undergraduate education at Clemson University with every intention of entering the veterinary school. But plans changed. After a family friend suggested she speak to the dean of Clemson’s nursing school, Dale changed her major and she hasn’t looked back since.

Her experiences caring for cows and horses as well as hunting with her father inspired her to seek a veterinary career. After switching gears to nursing, the instinct to nurture and provide help along with lessons learned from growing up on a farm made a career in health care a natural fit. “Having that rural, agrarian background kind of helps you make do with what you have and be a problem solver and critical thinker,” Dale said.

Dale, who earned her MSN from the University of South Carolina in 1990, and her husband decided to move full-time to their house on Lake Marion, and a short visit to nearby Summerton, South Carolina, showed there were no health care providers in the town. After a career ranging from practicing at an internal medicine group in Camden to Colonial Family Practice then Carolina Geriatric Specialists, Dale decided to take the plunge and open her own practice, Summerton Primary Care, this past January.

“It really was not a dream of mine to own my own practice, but I got [to Summerton] and realized that these people have no access to care. These are hard working, rural people, like those I grew up around in the country. Some of the people here have no transportation, and there's no public transportation so they have no way to get to town to a doctor. Everything fell into place. It was not something I planned, but I'm glad I'm doing it,” Dale said.

Owning her practice comes with its own set of challenges. As a nurse practitioner working without another medical practitioner on-site, she’s required to work with a supervising physician within 45 miles away. Finding a physician to work with her was its own challenge, and what she would do if her physician moves or otherwise changes their partnership is an ongoing concern.

As far as patient care, Dale regularly sees patients that have advanced diseases because of a lack of accessible health care, health maintenance and treatment. Often, patients come in needing tests or treatments they cannot afford. Despite federal legislation aimed at improving access to affordable health care, Dale still sees a large number of uninsured and underinsured patients. “That’s probably the biggest challenge and the thing that breaks my heart the most,” she said.

Despite these challenges and while she may not have always planned a career in nursing or eventually opening her own practice, Dale is pleased to do what she can to make a difference in the life of her patients. “Knowing that I make a difference in my little neck of the woods is a big reward,” she said. 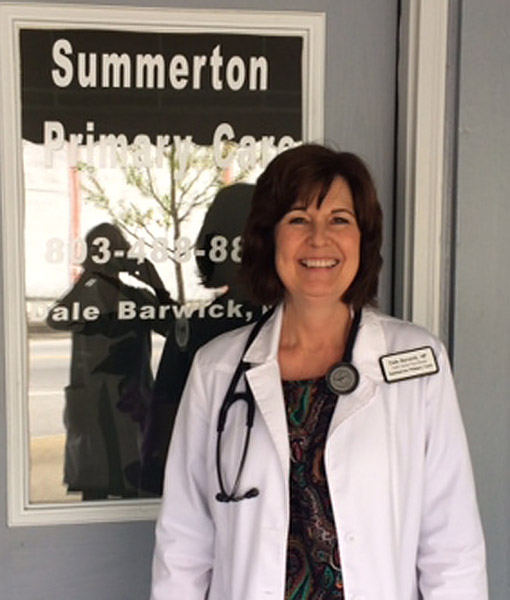