A Second Chance to Care 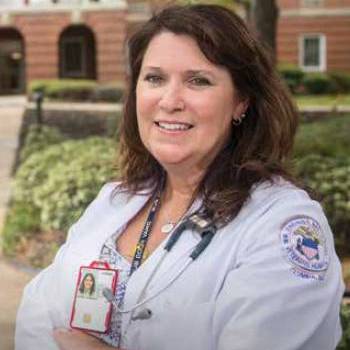 Kimberly Eaker began her college career studying early childhood education before being called to nursing. Her innate ability to connect with and read her patients confirmed to her that she was meant to be a nurse.

Her career has been a varied one, ranging from a neonatal intensive care unit to hospital bed sales to rehab nursing and hospice before tragedy struck. One of Eaker’s three daughters had a traumatic brain injury and was in hospice care for a time before she passed.

“I couldn’t carry my grief and my patients’ grief,” Eaker said, ”so I elected to move to another position, and that’s when I started working at the TBI clinic.”

At the Moncrief Army Community Health Clinic, Eaker was one of two caseworkers assisting soldiers diagnosed with a traumatic brain injury and/or post-traumatic stress disorder in accessing care. There, she would work with patients for a year or more as they transitioned from an active-duty position before discharging them from Department of Defense health care to the VA.

“I’d get to know my patients as people. I would see them for a year or two, and then we would discharge them and I never thought I would see them again,” Eaker said. “You think about people when you care about them.”

For Eaker, a second chance to treat some of her former patients came after she transitioned to a nurse practitioner role at the Wm. Jennings Bryan Dorn VA Medical Center. There, she is a provider in the primary care clinic, seeing patients both in-person and through telehealth methods. And some of those patients are a little familiar.

“Most veterans transition from the military and understand that they can no longer go to the DOD clinic, they have to go to the VA. That means getting to know a new doctor, a new nurse, having to tell your story again,” said Jeff Baker, a patient of Eaker’s at both clinics. He came to a pre-scheduled VA appointment, not looking forward to getting to know a new health care provider. “I turned the corner and it just happened to be Kim. It was just like a sigh of relief all over my body. I thought, thank God I don't have to tell my story. She already knows everything. It's rare for it to happen, but it was a sigh of relief.

Reconnecting with her former patients has been a blessing for Eaker. Not only having the chance to see how their health is progressing and to continue providing care for them, but to see how their lives have improved since their time at the TBI clinic.