A voice for nursing students.

As an undergraduate campus of 26,733 students, Student Government plays a key role in representing the voices and interests of students while working closely with university administration, faculty and staff. Sophomores Dylan Butler and Tiara Hebron serve as the College of Nursing student senators on UofSC’s Student Government council. “I want to help give a voice to nursing students on campus and work on opportunities to improve our Gamecock community,” says Butler. Hebron and Butler both joined Student Government as a way to get involved on campus and make changes- while meeting new people and creating friends.

“I can be a little shy and I thought joining Student Government would help push me out of my comfort zone and help me learn to assert myself more,” shared Hebron.

As senators, Hebron and Butler attend weekly Student Government meetings where they advocate for positive changes on campus. Each senator sits on a campus related committee where they review student comments, look over current policies, and work to pass effective legislation. Butler serves on the Health and Safety Commission, the Diversity and Inclusion Committee, and the Academic Committee. Butler’s most recent project as a senator has been working to pass legislation regarding grade forgiveness. After receiving student feedback, Butler and the academic committee began researching the grade forgiveness policy and compared the policy to other SEC schools. The committee then wrote legislation that was passed by Student Government and is now in the review and amendment phase within UofSC Academic Affairs.

Hebron serves on the Athletic Committee and is working on the campus athletic absentee policy. Hebron is also interested in addressing campus lighting and recycling later in the semester. Recently, Hebron and Butler led a Student Government meet and greet in the lobby of the College of Nursing. The senators were able to introduce themselves to students and share the ongoing projects happening around campus.

In addition to improving campus life, Hebron and Butler are building a range of skills that will help carry them through their professional and academic journey.

“Student Government has helped me learn how to communicate with others in a professional manner. I feel comfortable having challenging discussions with my peers and understand how to approach conversations with those in higher positions than me,” stated Butler.

While serving as a senator, Hebron has seen the value of being actively involved in her community. She plans to continue her Student Government involvement during college and says she’s enjoying learning about policy advocacy. “I now see the importance of being involved in nursing policy on the state and national level. Legislation and regulations affect how nurses’ practice.” 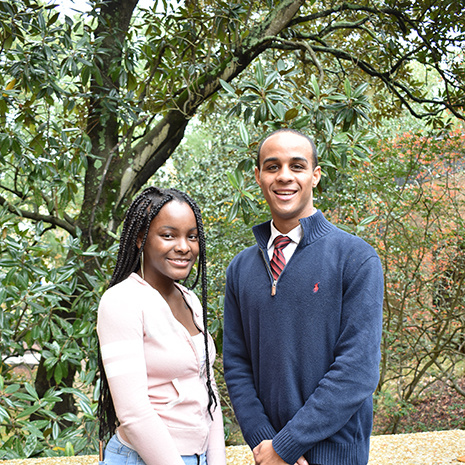