Dr. Ken Kelly, Distinguished Professor Emeritus, has been quite busy after retiring last May. He has edited a published volume titled "Connecting Continents: Rice Cultivation in South Carolina and the Guinea Coast". The volume was adapted from academic papers that scholars presented at a workshop that Dr. Kelly led about rice cultivation and the slave trade. The papers originally made up a special edition issue of the Atlantic Studies journal before the journal publishers asked Dr. Kelly to edit the papers for a volume. Among other comparisons, "Connecting Continents" examines how rice cultivation performed by enslaved Africans in the Low Country - coastal regions - of South Carolina links to the slave trade along the coast of Guinea, a nation in West Africa.

In the 18th and 19th centuries, the production of sugar created the majority of the profit from the slave trade and created great wealth for North Europe. Many of the sugar plantations were in Brazil and the Caribbean. In order to feed the large enslaved populations, countries exported rice. Dr. Kelly notes, "One of the reasons that rice was popular is that it was a product that could be produced and stored well". Low chances of spoilage made the crop low-risk to ship long distances between continents to feed its global audience. Apart from the enslaved, the free populations across the world also were incorporating rice into their cuisines. The need to feed the enslaved populations, as well as the growing popularity of rice amongst free people, led to the hundreds of thousands of Africans being shipped to South Carolina to work on rice plantations.

One major factor in the success of rice cultivation in South Carolina is that slave traders targeted people from areas where communities had traditionally grown rice. "[Plantation owners] owned the property that produced the product," notes Dr. Kelly. "But, it was the labor and knowledge of the people who were enslaved on these plantations that actually produced the product." This statement applies to many crops, including rice. For instance, slaves brought with them the knowledge of how to polish rice by removing the husks from the kernels. This process involved a six- to eight-foot long pestle to pound rice in a wooden mortar without breaking the kernels. This skill was important because whole kernels sold for a higher price than broken kernels. Slaves also managed the irrigation of the rice plantations and brought with them the knowledge of how to regulate the amount of water in the fields.

Through their agricultural expertise, enslaved Africans enriched South Carolina and, therefore, directly influenced the state's development. One should note as well that many famous historical state figures made their fortune from rice plantations. Dr. Kelly says, "[W]e owe a great deal in terms of understanding our history of the South and of the rice-growing regions to the knowledge that Africans brought with them...We need to valorize that..." 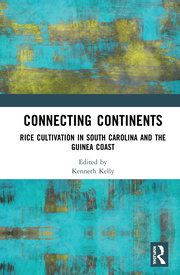