All University of South Carolina system institutions will be closed through the end of the spring semester. Columbia campus virtual instruction will continue through the conclusion of final exams in May. Details can be found on the coronavirus landing page.

Our lab seeks to define the mechanisms of iron (Fe) homeostasis in bacteria to disrupt this essential process in bacterial pathogens to attenuate their growth in the human host.  We use the bacterium Escherichia coli as a model organism to study the fundamentals of in vivo iron metabolism and the fish pathogen Mycobacterium marinum in order to characterize iron homeostasis in pathogenic bacteria.

Fe-S clusters are metal cofactors required by proteins that carry out many of life's most essential processes, such as respiration, nitrogen fixation, central carbon metabolism, and DNA repair. For example, the left panel shows the [4Fe-4S] cluster of aconitase, a key enzyme in the TCA cycle. Building and maintaining Fe-S clusters is a challenge to most cells because of the scarcity of iron in the environment and due to the presence of oxygen, which can react with and damage Fe-S clusters. Our NIH-funded project studies a pathway in bacteria, know as Suf, that is used to build Fe-S clusters under harsh conditions. A model of Suf function is shown in the banner above (center panel).

Single-celled bacteria can often serve as useful model organisms for molecular studies because they are rapidly growing, easy to manipulate genetically, and often have genes that are conserved in higher eukaryotes.  We also study bacteria to understand their physiological and biochemical differences from higher organisms (like humans) so that we can exploit those differences to disrupt the survival of harmful bacterial pathogens.  Most of our previous studies were using the "workhorse" organism Escherichia coli to study the fundamental details of iron homeostasis.  Recently we have also started to work with Mycobacterium marinum, a pathogenic bacterium that targets fish and amphibians but has a highly similar pathogenesis cycle to that Mycobacterium tuberculosis, the causative agent of TB. 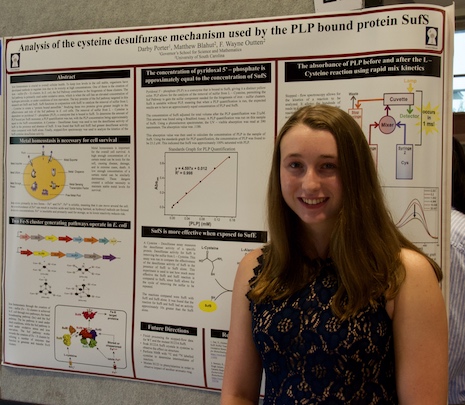 It was great to have Darby Porter working side by side in lab with undergraduate and graduate students this summer.  Darby is currently a high school student at the SC Governor's School for Science and Mathematics.