The activation and cleavage of the C-H bonds in simple hydrocarbons by metal atoms is an important step for transforming them into more complex molecules having higher value.  The activation/cleavage of an aromatic CH bond is shown in Scheme 1.

The addition of a CH bond of benzene to an alkene will yield an alkylarenes by the process known as “Hydroarylation”, eq. (1).

In recent years we have been studying reactions involving the cleavage of carbon-gold and carbon-hydrogen bonds in aromatic compounds by polynuclear metal carbonyl complexes.  We are interested in learning the mechanism(s) of these bond cleavage reactions at multinuclear metal containing sites, that is, how do these reactions occur when two or more metal atoms are involved in the cleavage process.  We are interested in gold, because the gold atom is similar to the hydrogen atom in that it contains one electron in an s-like orbital. Accordingly, we believe that cleavage of the C – Au bond could be a good model for the cleavage of the C – H bond.

Our investigations of reaction of arylgold complexes, such as C6H5Au(PPh3), have yielded a series of new polynuclear transition metal carbonyl complexes by cleavage of the Au – C bond to the aryl group.  For example, the reaction of Re2(CO)8(μ-H)[μ-HC2(H)n-Bu] with C6H5Au(PPh3) yielded the compound Re2(CO)8(μ-C6H5)[μ-Au(PPh3)], 1 which contains a bridging a bridging C6H5 ligand and a Au(PPh3) group bridging the two rhenium atoms by cleavage of the C – Au bond in the C6H5Au(PPh3), see eq. (2).

Compound 2 eliminates benzene by formation of a C – H bond between the C6H5 and H ligands upon reaction with donors such as NCMe, see eq. (4).  The mechanism of the formation of the CH bond at the dirhenium center was established by density functional theory (DFT) computational analyses and is shown in the video "CH Bond Formation."

Remarkably, compound 2 reacts with aromatic compounds, such as anilines, to eliminate benzene and add the aniline to the Re atoms by cleavage of the CH bond at the position para to the amino group to yield the compound Re2(CO)8(μ-C6H4NEt2)(μ-H), 3, see eq. (5).

Compound 2 even reacts with benzene itself to produce substitution by a CH activation process.  This reaction was confirmed by a reaction using C6D6, see eq. (6).

The C-H (or C-D) bond cleavage process involves the both rhenium atoms and an η2–C-H(D) coordinated molecule of benzene.  A sketch of the transition state (TS2) that was also investigated by DFT computational analyses is shown in Figure 1.  It was concluded that the second metal atom Re2 plays an important role in assisting in the cleavage of the C-H bond.

A molecular orbital analysis of TS2 revealed the nature of the bonding of the C-H group to the metal atoms.  The HOMO-17 shows the nature of the coordination of the benzene CH bond in the intermediate TS2, see Figure 2.  The HOMO shows the way in which electron density in the Re – Re bond is supplied to the CH σ*-orbital to promote the cleavage of the C-H bond. The video segment, "CH Cleavage," shows the mechanism of the cleavage process in real time as determined by DFT computational analyses.

Currently, we are investigating reactions of other polynuclear metal carbonyl cluster complexes, such as Ru5(CO)15(μ5-C), with gold alkyl and aryl complexes such as CH3Au(PPh3) and C6H5Au(PPh3).

Professor Adams’ presentation in the Priestley Medal Symposium at the 2017 National meeting of the American Chemical Society was recorded by the ACS with Audio.

To find out more about our research, you may want to examine Professor Adams Publications. 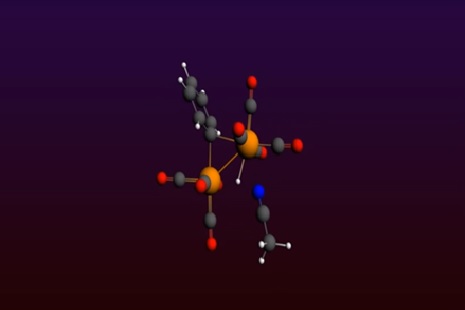 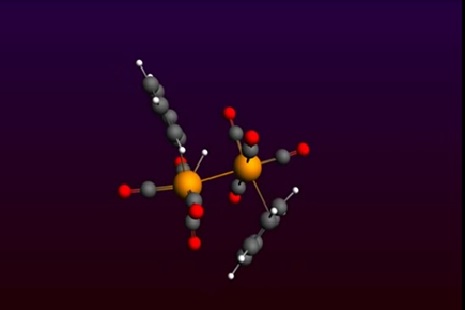