Quantum effects in dynamics of nuclei Quantum-mechanical effects in molecular dynamics are essential for accurate description and understanding of many chemical processes, such as those in surface reactions, photochemistry, in interactions of molecules with electric field, in chemistry of polymers, clusters and liquids. QM effects are the most pronounced in processes involving atomic and molecular hydrogen including reactions in enzymes, other biomolecular environments and nanomaterials. For example the isotope effects in water are manifested in such basic properties as melting point, which is 3.82C for deuterated water, and the temperature of maximum density in liquid state, which is 4C for water and 11.2C for deuterated water. Both issues can be resolved by doing dynamics simulation with quantum trajectories. Our theoretical work is guided by the ultimate goal -- to study dynamics of complex molecular systems using an accurate and efficient method which incorporates the quantum effects and is compatible with classical molecular dynamics. Possible applications include proton transfer processes in enzymes and other biomolecular environments and incoherent electron transport in open quantum systems, such as molecular electronic devices.

Quantum or Bohmian trajectories. The time-dependent Schrodinger equation can be recast in terms of the wavefunction amplitude and phase associated with the trajectories evolving in time according to Hamilton's equations of motion. All quantum effects are expressed through the action of quantum potential dependent on the amplitude and its derivatives, acting on a trajectory in addition to the external "classical'' potential. For general problems, the exact determination of the quantum potential is at least as difficult as the solution of the standard Schrodinger equation. We develop global approximations to the quantum potential (appropriate for heavy particles such as nuclei) which capture dominant quantum effects, such as zero-point energy, tunneling, wavepacket bifurcation, in a computationally efficient manner. Long-time (picoseconds) zero-point energy description is of special importance in condensed phase (system interacting with the environment). High-dimensional parallel quantum trajectory code with on-the-fly force calculations (DFTB) is being developed and applied to study proton transfer in material (Fig. 1) and biological environments (Fig. 2).

The role of Nuclear Quantum Effect on properties of materials. Recent experiments show that small effects in the changes in the zero-point energy of OH and OD affects properties of large molecular systems such as crystallization properties of P3HT this films (Fig. 3), photovoltaic properties of P3HT/CPBM blend developed for the solar cell applications (Fig. 4), the proton conductance through atomically thin films of graphene, hexagonal boron nitride and others. We explore these effects using the tools of computational chemistry and our the quantum dynamics methodology developed in the group. 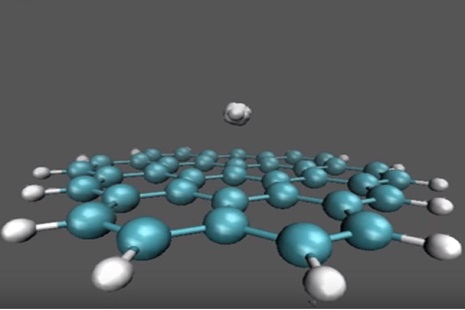 Collision of a proton, represented by the blue spheres, with the graphene flake without the quantum correction on dynamics. 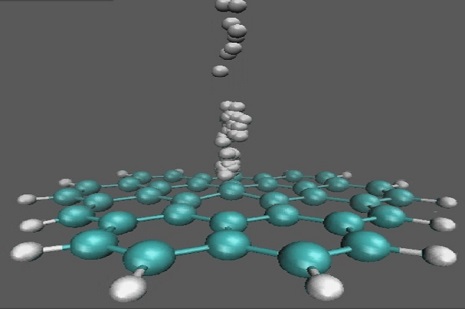 Collision of a proton, rerpesented by the blue spheres, with the graphene flake including the quantum correction on dynamics.