Dr. Victoria Davis sharpens her skills at the juvenile detention center and brings real-world lessons back to the classroom.

As a clinical assistant professor in the College of Nursing, Victoria Davis teaches pediatric nursing to under-graduates and a health assessment course for nurse practitioners. Two days each week, she also heads to the state Department of Juvenile Justice where she treats young people who are waiting for their cases to be heard in court.
That work at DJJ has helped her learn and grow as a nurse practitioner, she says, and informed her teaching at the University of South Carolina.

“It’s a really good practice for me because not only does it help me improve my skills because I’m still a fairly new nurse practitioner, but also because I really do see a lot of different diagnoses that I probably wouldn’t see in a primary care setting. It also gives me a different perspective than you would see in primary care. It opens my eyes to different things. I see a lot of kids who are in foster care. I see a lot of kids whose parents are incarcerated. I see some kids who have been trafficked.”
-Davis, a pediatric nurse practitioner

Through a contract between the university and DJJ, Davis performs physicals and sees sick patients — treating everything from colds to skin infections. Among the most common maladies are fungal infections and scabies, made worse by poor skin hygiene and often the result of young people living on the street or in homes with bad living conditions. The majority of her patients are boys between the ages of 12 and 17.
“It’s really interesting to hear people’s perspectives outside of there, because they really think the kids there are just all bad kids. They’re really not,” Davis says. “There are definitely some kids who have not abided by the law, but a lot of the kids there need a lot of TLC really. I would say 99 percent are respectful. They just want to be loved.
“I always ask them when was the last time they’ve seen a doctor. They can’t tell me.”
Davis joined the faculty at USC in 2015 after earning her doctorate in nursing practice from the University of Florida. Her DNP research was focused on pain management in children with sickle cell disease.
“As a nurse practitioner, I enjoy the puzzle. Being a provider, you work out the puzzle. I like that. I’ve always been a ‘fixer,’ and I like to see the reward of the problem I fixed,” she says.
At Carolina, nurses with clinical backgrounds often have con-tracts with medical providers, allowing them to keep up their nursing license requirements. Stephanie Burgess, associate dean for practice and health policy and clinical professor in the nursing school, recommended the DJJ position to Davis.
Along with the medical knowledge, she says she’s learned a lot about attitudes, adolescents and communication skills — information she brings back to her classrooms at the university.
“In my pediatrics class, we talk a lot about how to talk to adolescents,” she says. “That can be difficult. You have to be direct. You learn their slang — that’s a way you’re going to connect with them. We teach students how to talk to people at all age levels.”
She says some nursing students shadow her or the nurses on duty at DJJ, where they can assist with interviewing patients for their physicals, drawing blood, checking vital signs and taking measurements.
Davis also shares what she has learned with people in the com-munity. For example, she has heard some people question why churches and other civic groups perform services such as providing backpacks with food to give to school children on weekends.
“People I’ve met recently say, ‘Why are we doing that? There are no kids who need food for the weekend. Everybody can provide for themselves.’ That’s really not reality,” she says. “So, it’s interesting to educate them from my perspective. I tell them there might be people who don’t need that, but there are also a lot of kids I see who need food. And they need compassion and care and love. And they need support when they aren’t getting it from their families.” 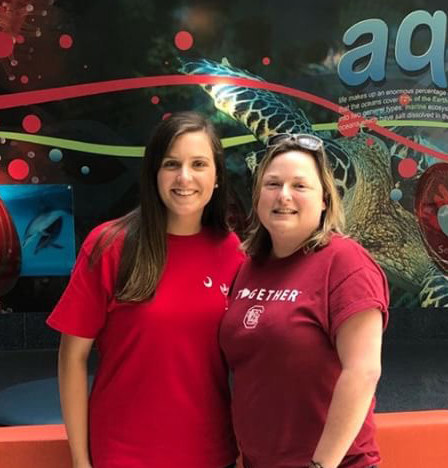 Davis has worked to translate some of what she learned at DJJ from a health equity perspective back into the classroom with the help of clini-cal assistant professor Kate Chappell and student Lauren Biggers.
Biggers, who earned her BSN
in May, is working on a Magellan Scholar project about health equity. Through the Magellan Scholar program, undergraduates can receive up to $3,000 to help fund a research project, competing for the award by submitting a research, scholarship or creative project proposal developed in collaboration with a faculty mentor. Biggers’ project was guided by Chappell, who specializes in pediatric forensic medical examinations, and Davis. The exercise showed how an asthma patient would fare in three different family scenarios, including a suburban home with a second child with developmental disorder and an immigration dynamic, a rural farm home with a parent with cognitive impairment, and a home in inner-city Columbia with a single parent with a low-income job and no private health insurance.
“We pooled our expertise and knowledge to create that project and get Magellan funding,” Davis says.