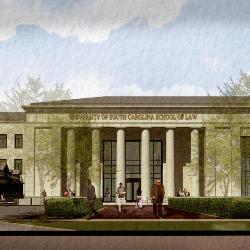 The new School of Law building will open in 2017 during the school's 150th anniversary year.

More than 400 law alumni, faculty and students gathered Friday (Sept. 26) to celebrate the groundbreaking of a new home for the University of South Carolina's School of Law that will open in 2017 during the school's 150th anniversary year.

When completed, the new School of Law building, bounded by Gervais, Bull, Senate and Pickens streets, will anchor a legal corridor along the north edge of campus that will comprise the school's Children's Law Center, the National Advocacy Center and South Carolina's Statehouse and Supreme Court.

"The School of Law's future success is based on its present momentum and its rich history," University President Harris Pastides said. "Our new state of the art structure will anchor a new legal corridor in South Carolina and project a modern, sophisticated image which matches our great expectations."

Stately in presence, the building will provide students with a learning environment that is modern, flexible and technologically advanced and that encourages collaboration and meets future needs.

Inspired by 19th-century South Carolina architect Robert Mills, the three-story building will feature a limestone and brick exterior. Its main entrance, located on Senate Street and flanked by limestone columns, will lead into a grand lobby. A large central courtyard will offer an inviting space for quiet outdoor study and social gatherings. The building's learning spaces – classrooms and courtrooms – are designed to be flexible in size, configuration and furnishings in order to accommodate different styles of teaching and group study.

Its green design allows for the building's interior to be swathed with natural light. A large two-story law library that overlooks the courtyard and includes a patio will feature modern compact shelving to maximize space for work and study.

School of Law Dean Robert Wilcox said the building promises to transform law education at the university and will reflect the school's commitment to excellence in preparing students for careers in law and public service.

"From its classical exterior to its flexible interior, we've been so mindful of every aspect of the design of this building, ensuring it will continue to shape legal education and serve our state for generations to come," Wilcox said.

The 187,500-square-foot building will incorporate the historic carriage house of the adjacent Taylor House for public functions.

Wilcox said it will provide a welcoming and professional environment for the more than 110 lawyers and judges who mentor law students and provide expertise through guest lectures, workshops and seminars. A versatile 300-seat ceremonial courtroom also will serve as an auditorium.

Not only will it give alumni a new home but the building will serve as a nexus for South Carolina's legal community, he said.

"By 2017, the halls of the new building will come alive with students and faculty, lawyers and judges eager to research, study and learn, and in the case of the public, to receive the services of our clinics," said Wilcox, who has served as dean of the law school since 2011.

The groundbreaking on the new building comes at an exciting juncture in the School of Law's history. The state's flagship law school is hiring new faculty, expanding its curriculum and refining its focus. Student success is evident through rising bar passage rates (first-time bar passage of nearly 90 percent in 2013) and job placement, with the school in the top 16 percent nationally in employment the last two years. And that has had a positive effect on the school's ranking, which has climbed 16 spots since 2011 to 93 in the latest U.S. News & World Report rankings. Current enrollment is approximately 630.

Alumni also are playing a role in the school's success. This summer 1954 alumnus Jim Konduros, a longtime adviser to government officials and Fortune 500 businesses, made a $1.1 million gift to the school to provide students with scholarships, fellowships and leadership development. Earlier this month 1977 law graduate William Hubbard began his term as president of the American Bar Association.

Structural work on the $80 million law school is expected to begin in early 2015.

Share this Story!  Let friends in your social network know what you are reading about

Get involved in what's happening @UofSC. We welcome your suggestions for stories, announcements and events. Faculty and staff also can submit grant announcements, presentations, publications and other notes. Let us hear from you.