Running for his life

Ken Lowden used to be so convinced he’d die of the heart disease that killed his father at 47 that he’d write secret notes to his children each year and stash them away with the Christmas decorations.

Now, a month from his 70th birthday, he’s training for his second Ironman Triathlon. When he competes in the Ironman Florida in Panama City Beach on Nov. 4, it will be nearly a year after undergoing a quadruple bypass.

“It’s not a bounce-back,” he says. “It’s a work-your-way-back, to regain the strength and confidence and stamina. My motto is ‘Feel a little stronger, go a little longer.’ ” 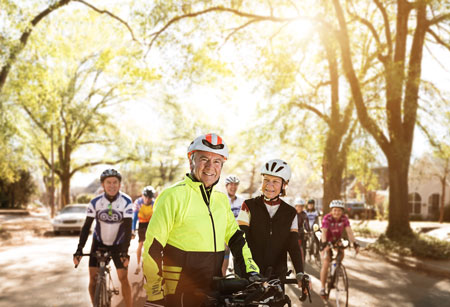 Ken Lowden's healthy lifestyle helped him recover from a quadruple bypass this past November. With an assist from his doctors at Palmetto Health-USC Medical Group, he's training for his second Ironman. (Photo by George Fulton Photography)

Driven to outpace his family history, Lowden took up running in 1976 as part of a commitment to the healthy lifestyle he steadfastly maintained for 40 years. This past winter, after distance runs on three consecutive weekends, he was tempted to shrug off lingering arm and shoulder pain as typical residual soreness, but his elevated blood pressure made him make a doctor’s appointment.

He was more surprised than anyone when Palmetto Health-USC Medical Group cardiologist Richard Edelson told him he needed a heart catheterization.

“Heart disease presents differently for each person,” Edelson says. “Some people will just rub some dirt on it and they’ll keep pushing on. Mr. Lowden is an athlete. He really did give me the impression he was tough. He was Rambo. He was John Wayne.”

John Wayne, that is, with a blockage. Suddenly, Lowden faced major surgery. “I had just run three consecutive 15- to 18-mile runs, with no indication at all that I had any kind of issues,” Lowden says. “They said I had a heart attack, but they couldn’t tell me when, and I couldn’t tell you, either.”

You can be ultra, super healthy, and eventually, your family history is going to catch up with you. If you’ve got any kind of heart disease in your family, don’t fear it. Be proactive. Get the tests done and see where you stand.

Given his top-notch physical condition, Lowden came through the procedure swimmingly. He credits his doctors and the Palmetto Health-USC Medical Group team with excellent, attentive care, but he still faced a long road back.

He and his wife, Patti, began walking — first around the house, then outside. Friends organized a meal train, bringing dinner and companionship every day, and signed up for shifts on a "Walk with Ken" calendar.

“In the beginning, it was a walk around the block — absolutely literally,” Lowden says. “By the time we finished, it was four miles.”

On New Year's Day, a few friends volunteered to accompany Lowden on his first walk of 2017. He was standing outside his house with three or four people when 70 more came around the corner. The festive occasion included a water stop complete with mimosas.

Lowden is now taking 30-mile bike rides and swimming in open water, though Ironman Florida will mark his first competitive ocean swim. That fact will be foremost in his mind at the starting line.

“I’ll be thinking, ‘Lord, let me finish this swim,’ ” Lowden says. “I’m going to be out there competing as a 70-year-old following cardiac surgery.”

Lowden isn’t sure if he’ll finish the November race. “My approach is going to be to train for it and just see where it takes me,” he says, but assuming he does, Lowden plans to share the medal he’ll receive at the finish line with Edelson and Martin.

Lowden’s fan club includes his son, who has qualified for the Boston marathon, and his daughter, a USC graduate who is training for a half-triathlon.

After his 47th birthday, Lowden stopped writing the annual Christmas notes to his children, and he’s tried to demonstrate by example the importance of taking care of yourself.

“You can be ultra, super healthy, and eventually, your family history is going to catch up with you,” Lowden says. “If you’ve got any kind of heart disease in your family, don’t fear it. Be proactive. Get the tests done and see where you stand.

“I’ve known about this family history and was proactive with my doctors, and as a result, I’ve been granted some extra time on this earth.”