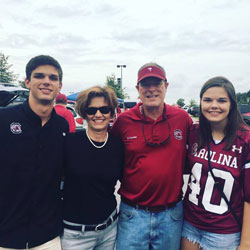 For Jack, Marilyn, Tom and Lucy Hagood, UofSC is truly a family affair.

Third-generation Gamecocks Lucy and Jack Hagood only applied to one school. With 15 UofSC graduates in their family, they knew they didn't want to go anywhere else.

Lucy, a senior, and Jack, a freshman, both have grown up wearing garnet and black in their hometown of Fort Mill, S.C.Their parents Tom, '82, and Marilyn, '81, began taking them to football games since they were three or four years old. Both Jack and Lucy said it was their dream to go to UofSC.

"My dad really spread his love for the university to me," Jack said. "I thank God everyday that I ended up loving it as much he did. It's the only place I wanted to go."

UofSC has been an important part of their family, and their grandparents even met on the Horseshoe. Since then, aunts, uncles, and cousins galore have made UofSC their home. Now, Jack is even living in the same residence hall his father lived in when he was in college. They hope to eventually even pass the tradition on to their own kids.

Although Lucy admits feeling a little bit of pressure from her parents to come to UofSC, both Lucy and Jack agreed that the decision was their own.

"I've always told people that UofSC is the best even before I had no reason to say that because I didn't know what it was all about until I got here," Lucy said.

Of course, their parents haven't been able to stay away from UofSC, and they constantly come down for football games and baseball games.

"Every weekend is like Parents Weekend for us," Lucy joked.

But having their family so connected to UofSC doesn't seem to bother either of them.

"It's a special moment because I'm carrying on the tradition that runs in my family, and family is really important to me," Jack said.

Jack and Lucy are trying to make their own legacy at the university, even though they chose the same path as their family members.

"They all have left their mark, and now I get to make mine," said Lucy, who believes a big part of her UofSC legacy is being a University Ambassador and having an impact on the next class of UofSC students. "I'm not just following in their footsteps, I'm leading my own path, but having that common thread with them is really cool."

Although Lucy and Jack grew up dreaming of being future Gamecocks, it was surreal at first to actually arrive. Lucy even remembers crying at her First Night Carolina.

"It was the culmination of 18 years of waiting to finally be where I was," Lucy said. "It was a dream of mine to go to UofSC just like all my family."

But the biggest moment for her was being able to hold up her hand for the alma mater. When she was little, she watched her family members sing the song, but her cousins told her she couldn't hold up her hand because she wasn't a real Gamecock.

She remembers a football game last year when, during the alma mater, she was able to raise her hand for the first time along with her dad and her brother.

"All of us being able to hold up our hand to Carolina was just a really big moment for me because it was something I had waited so long for," she said.