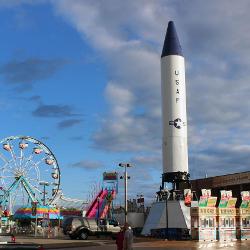 The State Fair’s landmark rocket has been elevated to 78 feet by a team that included four College of Engineering and Computing students.

Visitors to the 2015 South Carolina State Fair will get a front-row glimpse of the academic excellence of four University of South Carolina civil engineering students when they enter the fair gates this week.

The fair’s landmark rocket at the Rosewood Drive entrance has been elevated by 12 feet to 78 feet, following a summerlong Rocket Enhancement Project that was coordinated with UofSC’s College of Engineering and Computing and drew heavily on the design skills of Lexington’s Corey Wise and classmates Daniel Mosher, Clark Wells III and Kyle DeGennaro.

The four students were members of a summer senior design course and were tasked with designing a steel pedestal to support the elevated rocket as well as concrete foundations to support the pedestal.

Working under the supervision of Thermal Engineering Corp. in Columbia, the team members drafted construction plans that included lateral supports for the raised structure and created a park-style setting around the base that features stained concrete, benches and lighting.

“The most significant thing I learned was the process going from an idea, to a design, to a finished project. Obviously there are a million and a half steps in between each one,” says Wells, who is from Grosse Pointe, Mich.

The students stress their top priority was designing a safe structure and say they benefited greatly by working under the professional guidance of engineers including Bill Best of Thermal Engineering.

“It typically takes several years in the engineering field before being able to have the level of involvement in a project that we were given the opportunity to have in this one,” says Mosher, the team leader, of Corning, N.Y.

The completed project has made the rocket visible from a milelong radius and is intended to further establish it as a skyline icon in the Columbia community.

The students also hope it will raise the visibility of the engineering school.

“Nearly every time I mention to someone that I am studying civil engineering, they ask what exactly that is,” Mosher says. “While this project is only a small portion of what civil engineers do, it will be great to have a tangible example of what we do and what we, as a team, accomplished over the summer.”

DeGennaro of Warner Robins, Ga., says those looking for more examples need only come to the fair.

“I hope the community recognizes the level of talent and potential coming from students of USC’s engineering departments,” DeGennaro says. “We are ready to tackle any challenge set before us, no matter the difficulty or subject; we studied long and hard to go build a more efficient, safer world for ourselves and others.”

The students say they look forward to showcasing the rocket to their family members and friends during visits to this year’s fair, which opens Wednesday (Oct. 14) and continues through Oct. 25 in Columbia.

Lexington’s Wise, who has come to the fair for years with his family, says that visit and all future ones now hold even more significance.

“It will be great to show family and friends what it is I have actually been learning the last four years of college and what I am able to do with that knowledge I have gained,” he says. “And personally for me, it will be something great that my all of my family can relate to because we have been coming to the fair for years and I have had to ‘meet my mother at the rocket.’ "

State Fair manager Gary Goodman says the UofSC students’ involvement in the project was especially significant, given the fair’s emphasis on education.

“It was a great opportunity for some young people to get training and the opportunity to work with some professionals while they are in the middle of their educational studies that will benefit them for the rest of their lives,” Goodman says.