When she was a high school senior in Greenville, S.C., Analisa Wolff chose heady words from Mahatma Gandhi for her yearbook quote: “The best way to find yourself is to lose yourself in service to others.”

Now a junior international business major at Carolina, Wolff found herself through a service-learning project — and lost a piece of her heart in the process. It started with an alternative spring break trip to the Dominican Republic where she met a girl named Melissa.

“When I first got to the village, I started talking to this little girl. She said she was 11, but she was so small — she looked like she was maybe five,” Wolff says. “It turned out she had a serious illness that had stunted her growth.”

The two hit it off immediately and in the course of the week became fast friends. Little Melissa understood the imperfect Spanish of her new American friend who was getting an up-close look at poverty in a developing country.

By the end of that spring break trip, Wolff had resolved to raise the money for medical treatment that could potentially save Melissa’s life. 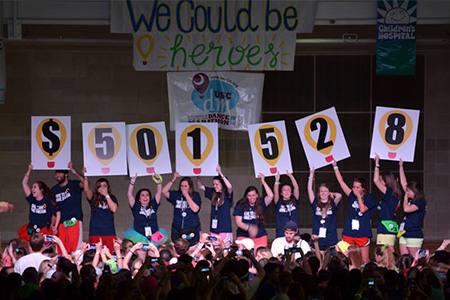 The university created USC Connect as part of its 2011 SACS reaccreditation with the idea of promoting two key pieces of undergraduate education: beyond-the-classroom learning experiences and serious reflection on how those experiences relate to students’ academic majors and life plans.

“Students often separate education from ‘real life’,” says Irma Van Scoy, director of USC Connect, which works to foster a culture of integrative learning on campus. “We try to help students connect the dots, to understand that the things they do outside of the classroom — service projects, research and internships, for example — can be transformational experiences that dovetail with their formal education.”

The concept of beyond-the-classroom learning isn’t new. College students have been gaining important life experiences outside of class for centuries, often without consciously thinking about it. But USC Connect takes a meta-approach, encouraging students not only to seek out such learning experiences — like Analisa Wolff’s alternative spring break — but to think about them in a purposeful way, as well.

“There’s a quote by the educator John Dewey that sums it up: ‘We don’t learn from experiences. We learn by reflecting on experiences,’” says Nick Vaught, assistant director of USC Connect. “That kind of reflection, when it’s done in a systematic way, helps students build thinking and articulation skills, the things that employers are begging for.”

USC Connect works with faculty and advisers across campus to help spread the word to students about beyond-the-classroom learning options and the opportunity to earn a credential for it, called Graduation with Leadership Distinction (GLD).

More than 900 Carolina students are currently pursuing GLD through a process in which they engage in beyond-the-classroom learning, document their activities and reflect on their overall collegiate experiences in an e-portfolio. More than 300 have graduated with leadership distinction from the Columbia campus and the four Palmetto College campuses, an honor that’s posted on transcripts and diplomas and which can help open doors to graduate school and employment.

“When we first talked about creating GLD, the dean of our School of Medicine got people’s attention when he said that kind of distinction from a university can help students get into med school,” Van Scoy says. “That helped people realize this is a worthwhile validation to offer our students.”

Leslie Knight graduated with leadership distinction in May 2015 as a public relations major after logging 300 hours of community service. Much of that time she was executive director of USC’s Dance Marathon, a student-run charity that raised more than $500,000 last year for Children’s Miracle Network hospital Palmetto Health Richland.

“The hardest part for me wasn’t the community service but creating a portfolio of my GLD experience,” says Knight, who also competed in the Miss South Carolina pageant this year as the Miss USC representative. “But it ended up being that ‘Aha!’ moment when I realized that what I had been learning in my public relations classes I was putting to work in Dance Marathon — we were motivating our customers and selling a brand to the public.”

The lessons Knight learned motivated her to pursue a master’s in mass communications degree from USC. Her ultimate goal? Working in fundraising or public relations for one of the more than 100 Children’s Miracle Network hospitals in the U.S. 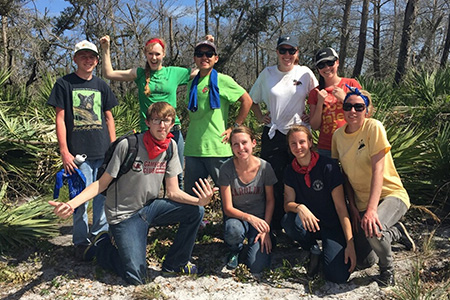 David Tran and his group on an alternative break trip

Laura Galloway spent an alternative fall break doing repairs and serving the homeless in Louisville, Ky., then returned to her undergraduate campus in Tennessee with the realization she had been living a sheltered life.

“I was from a small town in Tennessee and hadn’t been exposed to those kinds of things. That alternative break made me even more passionate about doing community service,” says Galloway, now a master’s in higher education student at Carolina who helps coordinate alternative breaks through the university’s Center for Leadership and Service. “One of the reasons I chose Carolina for graduate school was because of the passion for service that I sensed here.”

More than 120 USC students venture out on alternative breaks in small groups led by fellow students with faculty or staff members. Many more students participate in monthly Service Saturdays and weekly Impact trips.

“I tell students to sign up if they want an opportunity that they’ll never forget,” Galloway says. “It changes the way you’ll view the world.”

Theresa Mahoney, a finance major from Falls Church, Va., can identify. The president of the Carolina Service Council has been doing community service since she was a Brownie in kindergarten. As a sixth-grade Girl Scout, she helped collect 3,000 pairs of shoes for a charitable project.

I’ve learned that service is really about having a good attitude and an open heart.

“I came to USC as a scared freshman from D.C.,” Mahoney says, “and now my goal is to see student volunteers feel fulfilled and for the community to benefit. You’re in a little bit of a campus bubble when you’re in college so it’s a way to see the real world.”

When he volunteered for his first alternative break, biology major David Tran enjoyed the camaraderie of the experience. “We did everything together — clearing trails, building a fence, going to the store, eating, watching owls at night. I learned that working together as a team is essential in getting work done,” he says. Now an alternative break student leader, Tran has gained a broader perspective of what the breaks accomplish in terms of building community.

Exercise science junior Bailey Lewis is focused on her plans for medical school after graduation and welcomes the interruption of an alternative break. “It enables you to become a part of something bigger than yourself and to do something meaningful and impactful during your time at college,” she says. “I’ve learned that service is really about having a good attitude and an open heart.”

Service learning isn’t limited to alternative breaks. Jessica Junquiera, a doctoral candidate in English, is teaching a service learning-based English 101 course this fall that will have the students volunteering at Harvest Hope Food Bank, then writing about their experiences.

“We have the same types of writing assignments as other English 101 sections, but our essays will focus on texts such as ‘Fast Food Nation’ and the poet Ovid and his idea of humans’ fractured relationship with the earth,” Junquiera says. “I feel like I’ve gotten more participation in a course like this because they can relate to it in very tangible ways. We all have to eat.” 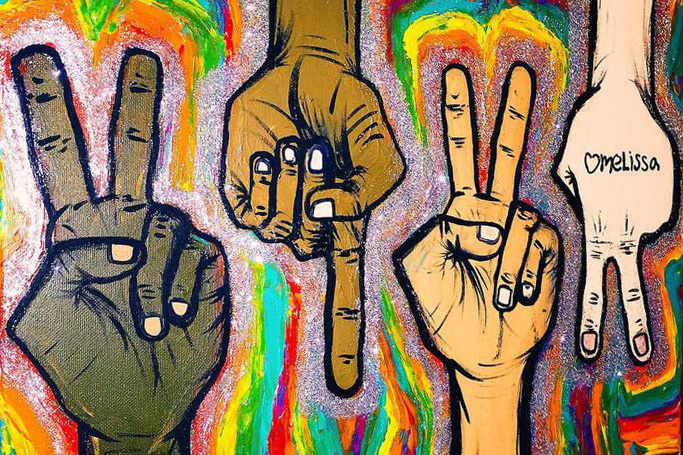 A painting Analisa Wolff painted it after Melissa passed away. The hands spell VIVA and the colors surrounded the hands mixed together to show that everyone is a part of each other.

Just four days after her alternative spring break trip to the Dominican Republic, Analilsa Wolff had set up gofundme page (a link to which can be found at www.vivamelissa.org) and within 30 days had raised $10,000 toward a bone marrow transplant for her young friend Melissa.

Wolff returned to the island nation this past summer to get Melissa’s medical records. Late in the summer, just two weeks before the fall semester began, she found a physician specialist in New England who agreed to treat Melissa if she could be transferred to the U.S. But the little girl’s condition had worsened over the summer.

The day after Wolff had gotten the good news about the possibility of treatment, Melissa’s grandmother called. “Ella se murió,” she said, again and again. “She died.”

Wolff’s grief was overwhelming; her heart broken. But she resolved to continue the VivaMelissa project with a new focus on improving conditions in Melissa’s village. That goal dovetails with the aims of the Sister Island Project, a nonprofit that promotes cultural exchange between the U.S. and the Dominican Republic and which coordinated Wolff’s alternative spring break trip to the island.

“I want to help them start growing cocoa, coffee beans and fruit and set it up to sell online,” she says. “And I want to eventually set up scholarships for students to start more initiatives like this in other countries.

“This whole experience has taught me so much, especially about developing countries and their potential to thrive. Making an impact and getting involved with these issues is so fulfilling, and I am lucky to be part of a generation that gets these opportunities. We’re going to make the world a much better place.”