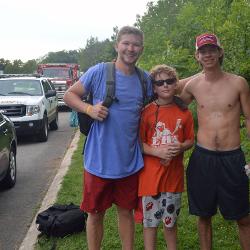 Best friends Mark Kingsmore (right) and Ethan Hinkle (left) chose different colleges, but worked together when it was important — saving a man's life.

This past summer was quite an extraordinary one for University of South Carolina student, Mark Kingsmore, and his best friend, Ethan Hinkle. Not only did Kingsmore work at an internship in Buffalo, N.Y., but he and Hinkle also helped save a man’s life. The man they helped – Perry Mortillite – was so thankful that he wanted to share his story to show how selfless and commendable the young men were during the time of his accident.

Kingsmore, a 20-year-old, junior international business and finance major, lived 20 minutes away from Niagara Falls this summer during his internship. His best friend, Hinkle, a 20-year-old, junior biology major at Clemson University, came to visit him one weekend in July. The two friends decided to hike a trail on the Niagara River, just north of the falls. Mortillite and his family were vacationing in Niagara’s Whirlpool Gorge, which is a few miles north of the falls.

Mortillite slipped, hit his head on a rock and fell into a small pool of water just feet from dangerous rapids. His wife, Barbara, held his head above water while his 12-year-old son, Alec, screamed for help. Kingsmore and Hinkle were sitting on a rock overlooking the river when they heard Alec's screams.

The two students pulled Mortillite out of the water and stayed by his side until park rangers and emergency workers could respond. The students tried to keep young Alec's spirits up while they waited to see whether his father would be OK.

“Mark literally gave the shirt off his back, dipped it in water and used it to keep me cool,” Mortillite says.

As a helicopter arrived to pick up Mortillite, Kingsmore and Hinkle made sure that Barbara Mortillite and Alec made it back safely to the top of the gorge, which was a 250-foot hike up stone stairs. Mortillite was touched by how much the young men cared for his family by staying with them.

“Mark Kingsmore was a true hero that day: unselfish, caring and willing to help strangers in need,” Mortillite said. “The University of South Carolina should be very proud that he is a part of their community.”

“A few people kept walking by on the trail,” Kingsmore recalls. “But Ethan and I acted in the way we would want people to act towards us if we were in a similar situation with our families.”

Mortillite suffered a gash on his head, broken ribs and short-term memory loss. For the past couple of weeks, Kingsmore has been checking in with Mortillite through Facebook.

Kingsmore and Hinkle are both from Irmo. They met when they were 5-years-old and have been best friends ever since.

Since the incident, Mortillite's son has been proudly wearing Kingmore’s Gamecock T-shirt.