Jacques W. Clerville, Fulbright scholar and Haitian physician, was inspired to pursue a Master of Public Health in Epidemiology at the Arnold School of Public Health after the 7.0 magnitude earthquake in 2010 and the cholera outbreak that followed 10 months later. 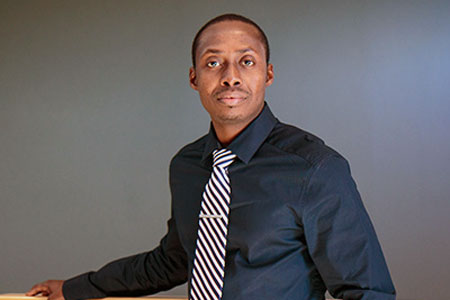 “I have to say this experience as a public health student has given me a broader view of the health system and the knowledge I need in order to impact it." — Jacques W. Clerville, '16 MPH

Growing up in Les Cayes, Haiti’s third-largest city, Clerville went to Ecole Frere Odile Joseph for his early education. Then he moved to Port-au-Prince, the country’s capital and largest city, to finish high school at St. Louis de Gonzague and earn a medical degree from Université Notre-Dame d’Haiti. Clerville completed his seven-year program with a year of social work — a mandatory requirement to become a licensed physician in Haiti. He ended up back in his hometown, where he practiced medicine as a primary care physician at the local public hospital and a private medical center.

“I remember I was there, writing a prescription for a patient, when I felt the 35-second, 7.0 magnitude earthquake shake the country,” he says. “Thanks to God, my entire hometown was spared; however, hundreds of thousands of people lost their lives in the capital city and over a million were left homeless.”

A short nine months later, a devastating cholera outbreak ravaged the nation. Nearly 500,000 cases of cholera were reported, with 6,631 deaths attributed to the epidemic, making it the worst cholera outbreak in recent history, according to the Centers for Disease Control and Prevention.

Amidst this public health nightmare, Clerville found himself wondering what he could do to help. Consequently, he joined Doctors Without Borders, which established a cholera treatment center in Les Cayes. Clerville worked up to 72 hours a week for four months until the emergency phase had passed.

“This experience has completely changed my perspective on health care and public health,” he says. “As a physician, I felt overwhelmed by the number of patients who came severely dehydrated to the treatment center and, sometimes, unconscious. I realized how I was limited with my clinical skills and knowledge. As a clinician, I felt incapable of stopping the spread of the disease, and this made me figure out the substantial role of public health in a health care system.”

The bottom line is to improve the health conditions of the Haitian population, and I want to be part of it.

A couple of months later, Clerville was selected among the 10 best applicants to attend a one-year post-graduate intensive training program in Infectious Diseases and HIV, funded by the President’s Emergency Plan for AIDS Relief through the Institute of Human Virology in a partnership with the Université Notre Dame d’Haiti. The training was provided in Port-au-Prince by faculty from the University of Maryland and Université Notre Dame d’Haiti. During this training, he participated in journal clubs and attended epidemiology classes.

“These activities definitely motivated me, and I became interested in becoming an epidemiologist,” he says. “From this moment, I saw epidemiology as a means to provide evidence-based information to improve medicine and public health practice, particularly in my country where there is a lack of scientific literature.”

Looking to make a 'significant contribution'

After completing this program, Clerville applied for the Fulbright Scholarship through the U.S. Embassy in Haiti to pursue a Master of Public Health in Epidemiology.

In his program in the Arnold School’s department of epidemiology and biostatistics, Clerville developed skills that fit his unique perspective and circumstances.

For example, he researched and lectured on “Surveillance in Low Resource Settings” for a Public Health Surveillance Systems class.

“Considering that infectious diseases represent major public health issues in Haiti, I believe effective and integrated epidemiologic surveillance is one of the best strategies to detect, respond adequately to epidemics and prevent future events,” he says. He also worked on a systematic review/meta-analysis on ovarian cancer and studied topics related to breast cancer.

“Besides the burden of infectious diseases, noncommunicable diseases are prevalent in Haiti, and there is very little research on cancer,” he says. “I would like to bring a significant contribution in this field.”

After his 2016 graduation, Clerville returned to Haiti to apply what he learned.

“I am committed to helping Haiti achieve better health outcomes by participating in the implementation of effective surveillance systems to track infectious diseases, noncommunicable diseases and other significant health events,” he says.

He also wants to foster more interest for epidemiology among Haitian medical students, educating them on research benefits and how they can use epidemiology to improve their medical knowledge.

“Even though epidemiology is part of the medical school academic curriculum, few Haitian physicians are research-oriented,” he says. “Eventually, I will be able to collaborate with other entities in the health sector to strengthen the Haitian health system.”

Clerville credits his Arnold School experiences and his various mentors, such as professor Anwar Merchant, for helping him take advantage of his experience as a Fulbright Scholar.

“I have to say this experience as a public health student has given me a broader view of the health system and the knowledge I need in order to impact it,” he says. “The bottom line is to improve the health conditions of the Haitian population, and I want to be part of it.”