The power of nursing 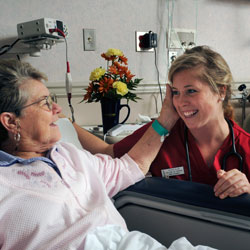 When alumni Earl and Barbara Huitt Lovelace were caring for their aging parents, they saw first-hand how important nurses are to families in need.

Barbara Huitt was a nursing student and a cheerleader at the University of South Carolina when she met Earl Lovelace, a basketball player and history major, in the mid-1960s.

After graduation (Earl in ’67 and Barbara in ’68), the two married and Earl went to work for 42 years as a teacher, coach and principal in public schools, Orangeburg, Irmo, Rock Hill and Summerville, S.C., and Kingsport, Tenn. Barbara worked for three years as a school nurse before taking time off to be a homemaker. She returned to school nursing for another 14 years and now serves as a volunteer at a local hospital in Kingsport.

The Lovelaces remained faithful members of the Gamecock family, returning to Columbia for athletic and other events, but they wanted to do more.

It was while they were tending to their aging parents that the importance of skilled health care workers became obvious.

“Both of us saw the value in what caregivers gave to our parents and our families and what their dedicated help meant,” Earl says.

Earl wanted to establish a scholarship for nursing at Carolina in Barbara’s name, but she insisted it be in both their names.

The Earl and Barbara Huitt Lovelace Nursing Endowed Scholarship will be awarded annually to an upper-division nursing student based on need, says Monica Cromer, director of development for the College of Nursing. The first recipient will be chosen in January 2016.

Nursing is one of the fastest-growing, fulfilling and versatile career opportunities available. With excellent NCLEX pass rates and high employability rates we are improving the accessibility and quality of health care throughout South Carolina, the U.S. and around the world.