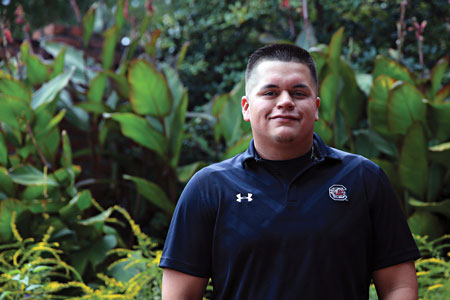 The seeds of Sam Moore’s entrepreneurship were planted when he was still an economics major at Carolina.

A native of Lebanon, Moore came to America and enrolled at USC because he had an uncle living in Columbia. To help pay his way through college, he took a summer job selling Bibles door to door in Sumter County.

After graduation, Moore moved to Nashville and started Royal Publishing to market Bibles and other books. He became so successful that the owners of a centuries-old Scottish publishing company asked him to be their North American representative. Instead, Moore bought their company, Thomas Nelson and Sons, and was its chief executive until he retired in 2005; it’s now a subsidiary of HarperCollins.

Moore recently decided to endow the Sam and Peggy Moore Advantage Scholars program with $1 million. Scholarships, to be awarded by the university’s Gamecock Guarantee Scholarship Committee, are need-based and intended for academically qualified, first-generation college freshmen from S.C.

“While the Gamecock Guarantee covers the basics, the full college experience includes beyond-the-classroom opportunities that enrich education, increase employability and enhance lives after graduation,” Myers says. “These opportunities, including internships, are still out of reach for many, particularly those from low socioeconomic backgrounds.”

Gamecock Guarantee scholarship recipient Jaime Ortega of Gaffney, S.C., took advantage of an internship this past summer to work for paint manufacturer and retailer Sherwin-Williams. Ortega is a senior economics major, with minors in government and administration. He plans to graduate this spring and hopes to land a full-time position in Sherwin-Williams’ management training.

Ortega is the first in his family to go to a university. His parents immigrated from Mexico and work in a meatpacking plant in Gaffney.

“Growing up in Gaffney in an old mill house, I was miserable, I hated my circumstances,” Ortega says. “I prayed that one day God would give me the opportunity to make something of myself.”

In addition to his internship, Ortega also helped start and lead a Latino fraternity, Phi Iota Alpha, which has about 20 members from many ethnic backgrounds. “To all Gamecock Guarantee donors, I say, ‘Thank you for allowing my dreams to come true,’” Ortega says. “I plan on donating to the program myself after I graduate because there is someone else out there crying and begging to God for a chance.”