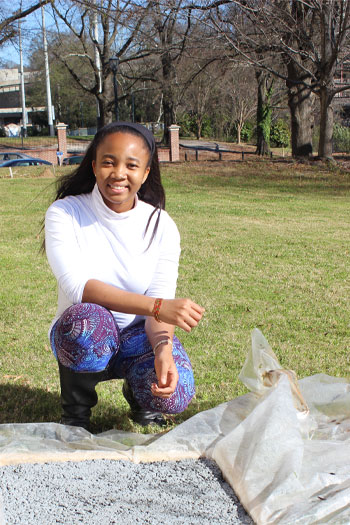 When heavy rain hits hard surfaces like highways or parking lots, the resulting runoff can cause trouble — as it did three months ago during South Carolina’s historic flooding.

But what if those hard surfaces allowed some of the water to soak through to the ground underneath? That’s the concept behind civil engineering senior Fedora Nwachukwu’s project through the Sustainable Carolina initiative. With environmental sciences major Nick Smillie, she’s been mixing up a special concrete formula that demonstrates the flood-reducing possibilities of permeable surfaces. They've made 20 squares of the material that are being used as stepping pavers in the garden behind Green Quad.

“This demonstration project ties in well with my engineering major, and I’ve learned a lot about the limitations and possibilities of this material,” says Nwachukwu, who immigrated to the U.S. from Nigeria when she was 14.

Standard concrete used to make the floors of big box stores or sidewalks and driveways is manufactured in strength ranging from 2,500 to 6,000 pounds per square inch. It’s strong, impermeable, and rainwater runs off it like water on a duck’s back.

The permeable concrete Nwachukwu is making is less strong — 400 to 4,000 psi — but far more permeable. Point a wide-open garden hose at her concrete pavers, and nearly every drop soaks straight through. That’s because permeable concrete doesn’t have the small particles, typically sand, to fill in the spaces between the larger rock aggregate. But it’s that smaller aggregate that helps give the concrete its strength.

“It’s strong enough to walk on or push a loaded wheelbarrow over but not strong enough to support automotive traffic,” she says. “There are types of permeable concrete that could be used in car washes, low-traffic streets or driveways where large trucks wouldn’t go. Developing these materials further could really help in reducing rainwater runoff.”