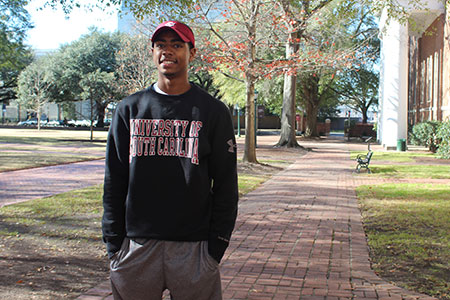 Sophomore electrical engineering major Vernon Pryor earned a Department of Defense SMART scholarship that covers tuition, room and board for three years and guarantees him a position as a civilian employee after graduation.

Vernon Pryor was a little unsure about coming to Carolina when he was offered admission to the Gamecock Gateway program. He had other acceptance letters — from Morehouse College and North Carolina Central, for example — and if he came to Carolina as a freshman through the Gamecock Gateway, he would be taking all of his classes at Midlands Tech for that first year.

He took the offer, but wondered about how mainstream his experience as a Gamecock would be.

“All of my friends who applied to USC got in, so that got me down the first couple of weeks,” he says. “But I’m living on campus. I have the same perks as they do, the meal plan, access to the gym. And the class sizes were also smaller. That really turned my attitude around.

“They really made us feel like full-time Carolina students. It was a good experience for me.”

Pryor’s academic success that first year was instrumental in his earning a highly competitive Department of Defense scholarship as a sophomore. The Science, Mathematics and Research for Transformation (SMART) scholarship covers all tuition, fees and room and board for his sophomore, junior and senior years. It also provides summer internships in between those academic years.

A summer internship when he was attending high school in Charleston, at the SPAWAR Systems Center Atlantic, is how he first became acquainted with the Department of Defense’s programs for civilian scientists and engineers.

“We were working with telecommunications, electromagnetics — I can’t really go into it in detail, because they told us the information is kind of sensitive,” Pryor says. “It was a great experience, and it definitely solidified my major.”

For Pryor, who likes working hands-on with breadboards and the entire building process involved in electrical engineering projects, it’s the perfect opportunity.

“After you finish college, you can transfer to any naval installation in the world,” he says. “I’m thinking about Germany, Hawaii, San Diego, Dubai. It’s a great chance to travel and still do something that I love.”

SMART scholarship candidates are supported by the University's Office of Fellowships and Scholar Programs.