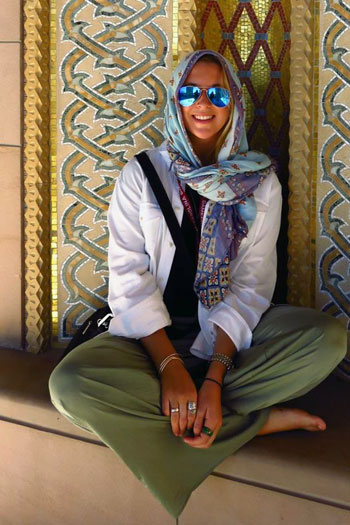 Alexandria Caputo is a senior political science major with a minor in Islamic studies and a concentration in Arabic; she works as part of the student staff for International Student Services.

Alexandria Caputo was the first student from the University of South Carolina to travel to Oman.

“I would have to say that Oman is one of the strongest countries in the Middle East,” she says. “Everything was real raw, there is no touristy factor to it.”

Part of her four months in Oman consisted of Arabic studies for 30 hours a week, five days a week.

“It was a fascinating time to be there,” she says. “The political climate was unique and it was amazing that I was in a country that was so fresh — that’s not like any other place in the world.”

Caputo has been involved in Islamic studies ever since high school. By that time, she already knew she wanted to immerse herself in the culture. She met a friend from Saudi Arabia in her freshman English class, and he encouraged her to embrace learning the Arabic culture.

Fast forward to senior year and Caputo has not only been to Oman, but also to Morocco and Israel. Caputo is a senior political science major with a minor in Islamic studies and a concentration in Arabic; she works as part of the student staff for International Student Services.

“All of the places that I’ve traveled have provided the best learning experiences for me,” Caputo says.

Her first international endeavor was going to Morocco between her sophomore and junior year. This was the first time she was able to study and use Arabic abroad. She stayed in the French quarter and was able to learn about the culture see first-hand the political climate affecting the country.

As a global learner, Caputo seeks to find opportunities where she can see things for herself and make her own judgments in a new environment. That’s why she didn’t stop at Morocco but ventured on to Oman her junior year.

She hopes more Carolina students can travel to the country.

One lesson she took away from her time in Oman was how to relax and be flexible.

“A common saying that I heard was ‘mafi muskila’ which means no problems. Coming from America, that was something I had to learn — to just go with things and relax. The people are so into family and enjoying the moment — so for someone like me, who’s always on the go, that was a cultural difference I embraced, which made me into a better person.”

Her most recent adventure, at the beginning of this year, was going to Israel on a trip sponsored by the Jewish Studies department in the College of Arts and Sciences. For two weeks, she studied in a program that focused on the roots of Judaism, Christianity and Islam and their relationship to each other in the region, as well as the history, background and current relations between Israel and Palestine.

“This was a wonderful opportunity where I was able to gain first-hand knowledge about a region that is now in the media,” Caputo says.

She gained real-world experience in the West Bank and East Jerusalem through her conflict studies and by meeting with nongovernmental organizations that partnered with Israelis and Palestinians to work with young people to create peace.

“The biggest lesson I took away from my time in Israel is that you have to exceed the idea of coexistence and tolerance to truly make a change,” Caputo says.

All Caputo’s international experience leads into what she wants to do after graduation.

“My main goal is to get into international security,” she says. “I want to get into a field where I can work with younger people so they don’t become radicalized. I want to make sure that they know that there’s another outlet and to help the people living without dignity to get back on their feet and live with a sense of pride.”

Everything has been a learning experience for Caputo.

“When it comes to these new experiences, I’ve embraced getting out of my comfort zone and pushing myself because there’s more to travel than just seeing things, but also to experience and learn,” she says.