When Julia Frazier first moved from Pittsburgh to study at the University of South Carolina, she wasn’t sure exactly how she would fit in. Lots of her fellow freshmen were rushing for sororities, but Frazier “didn’t know what that was,” she recalls, laughing. “I was like, ‘Oh no — I already don’t fit in. I need friends.’”

It didn’t take her long to find them. 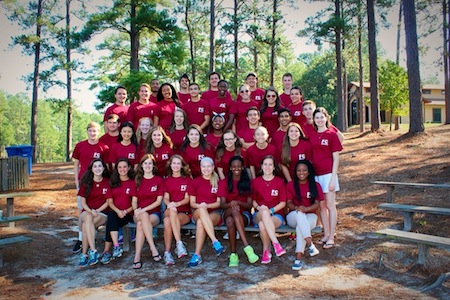 The Freshman Council teaches students about leadership and organizes fundraisers and other events on campus. Pictured: 2014-15 member retreat.

Frazier had been student body president at her high school in Pennsylvania, and she knew she wanted to get involved in student government in college, too. So when a former student treasurer told her at orientation about Freshman Council — an entry-level arm of Student Government that emphasizes leadership and community involvement — Frazier was receptive to the idea of applying.

Frazier applied and was accepted — not quite understanding at the time, she says, how much of an achievement that really was. “I found out after I was accepted that it is super prestigious,” Frazier says. “It’s a big deal, and I had no idea because I’m not from here.” Frazier, a double major in marketing and management with a minor in sports management, went on to serve as a student senator.

The council, founded in 1989 by former Student Body President Marie-Louise Ramsdale, selects its members through a competitive interview process. Those who are accepted become part of an elite leadership group that can open up personal and professional opportunities of all kinds. One former Freshman Council member, for example, is Tommy Preston, who went on to be student body president and is now president of the My Carolina Alumni Association. Preston founded the Cocky’s Reading Express initiative while he was a Carolina student.

Four years after joining Freshman Council, Frazier is co-adviser of the organization along with Evan Katz, a senior from Lexington majoring in civil engineering. Together, they are hoping to drum up interest in the Freshman Council among the current crop of freshmen; the deadline to apply is Aug. 31. 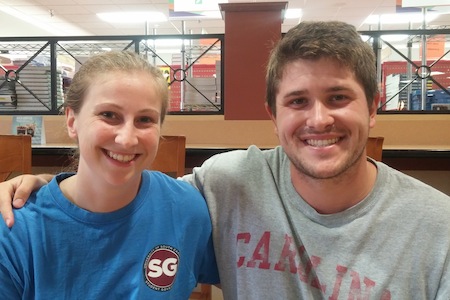 Students who join the council will serve on committees ranging from athletics and safety to multicultural affairs and first-year involvement. The council members develop community initiatives on their own, but each is assigned a mentor to help guide them, as well as having Frazier and Katz serving as advisers.

“They’re freshmen, so they don’t know the resources — they don’t know who to reach out to,” Frazier says. Adds Katz: “We don’t want them to take on too big of a thing and then get discouraged.”

With a little guidance, freshmen can hone their ideas, take on manageable projects and learn a lot in the process. Many of the projects Freshman Council takes on are on campus, but others have involved service in the broader community, such as taking part in Service Saturdays and working on a Hoops for Hope fundraiser to benefit the Alex's Lemonade Stand Foundation, which fights childhood cancer.

Like Frazier, other students who have been on Freshman Council speak highly of its benefits.

“I joined basically because I wanted to give back to this university,” says senior Aaron Bomar in a Freshman Council video. “This is a great school. I already loved it so much, and I wanted to do anything I can to make it a better place and help other freshmen get acclimated to coming to college and starting a whole new life.”

“It’s just such an important time in their development as a college student.”

Frazier’s and Katz’ enthusiasm for increasing the pool of applicants comes in spite of the fact that it means more work for them — perhaps a lot more. The number of applicants could reach 200 or more for the roughly 30 spots available. A selection committee reviews the applicants, with at least 60 percent of those applying going on to a personal interview. Frazier and Katz are charged with conducting the interviews, which typically last about 20 minutes each.

“We want to get the best people possible,” Katz says, in spite of the fact that it increases their workload.

As co-advisers, Frazier and Katz not only manage the application process, but also help plan a retreat for the group, serve as facilitators for its meetings and generally work to make sure the freshmen have an enriching and productive experience.

“It’s just such an important time in their development as a college student,” says Katz, who is new to Student Government but has worked with freshmen as a resident mentor and as an orientation leader.

“Yes, we want the freshmen we choose to go on to higher-level positions, but priority number one is that they all find a niche for themselves,” Frazier says.

Visit the Freshman Council website, to learn more about getting involved in Student Government.