Activist and author Marian Wright Edelman wrote “The Measure of Our Success” as an open letter 24 years ago to her three sons. Edelman writes about her own life, being born in 1939 and living in South Carolina as an African-American woman, to her founding of the Children’s Defense Fund in 1973. 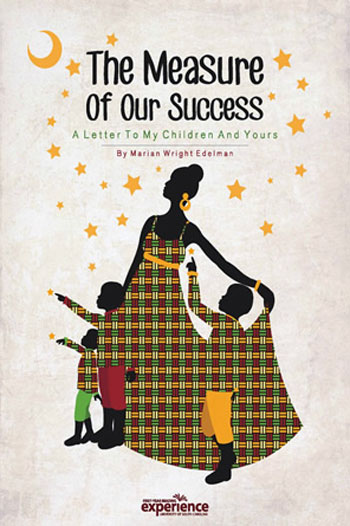 Her 25 lessons of life are simple and effective that anyone can apply regardless of age, race, gender or religion. The themes, addressing issues such as relationships and goal-setting, are particularly relevant to new college students.

The book was selected for this year’s First-Year Reading Experience and Edelman will speak on campus Tuesday (Sept. 20).

We caught up with her recently to ask her a few questions about the book, about the victories of the past quarter-century and about challenges remaining.

Every day, I wear a pair of medallions around my neck with portraits of two of my role models: Harriet Tubman and Sojourner Truth. They represent countless thousands of anonymous slave women whose bodies and minds were abused and whose voices were muted by slavery, Jim Crow, segregation and confining gender roles throughout our nation’s history. When I think I’m having a bad day, I think about their days and challenges, and I get up and keep going.

In the beginning of your letter to your sons, you say “It is utterly exhausting being Black in America – physically, mentally, and emotionally.” Is it still the same today, 24 years later, even near the end of two terms for the nation’s first black president?

The odds are still stacked against black children. Black children remain the poorest children in America. More than 60 years after Brown vs. Board of Education, many black children still attend segregated schools and are still getting a separate, unequal and failing education. More than 80 percent of fourth- and eighth-grade black public school students cannot read or compute at grade level. In South Carolina, 85 percent of black fourth-graders could not read at grade level and 84 percent could not compute. Black children and youths are at greatest risk of being funneled into the prison pipeline and at highest risk of gun violence. And the recent series of killings of unarmed black boys and men by police officers have reminded the whole nation that justice cannot breathe when black men and boys and women and girls are profiled, abused, arrested and killed with impunity. God did not make two classes of people or children and America continues to do so at its peril.

Today’s young people must pick up the torch and become the informed and caring leaders of the next transforming movement against bigotry, intolerance and violence and towards justice and equality for all.

Reading your book, it can be discouraging to think how little has changed and how some things seem to have even gotten worse in the ensuing 24 years. How has your view of America changed in the past two decades? Do you think it’s better, worse, the same?

We’ve come a long way, but we still have far to go. So many of the formidable threats millions of poor children of all races, but especially black children, face today are actually dangerous steps backwards: The “Cradle to Prison Pipeline” crisis; unjust policing and mass incarceration of people of color — especially black males; resegregating and substandard schools denying millions of poor black, Latino and Native American children skills they will need to work in our increasingly competitive globalized economy; epidemic gun violence that kills or injured a child or teen every 30 minutes in the U.S.; massive attacks on voting rights, which especially impact the poor, minority groups, the elderly, the disabled and the young. Despite all the harsh lessons of the past and all the lofty rhetoric about who we want and need to be as a 21st century multicultural nation in a multiracial and multicultural world, we still need to correct course and challenge the huge and interlocking economic and racial inequalities that threaten the very idea of America.

You say vote and hold those you vote for accountable … we get the political leaders we deserve. How do you think that is applicable today?

People who don’t vote have no line of credit with people who are elected and pose no threat to those who act against their interests. Yet far too many Americans don’t even bother to exercise their precious right to vote. Although the sacrifices of the civil rights movement are still fresh wounds for all of us who lived through it, for another generation of Americans they are already becoming ancient history. It’s important that we teach and remember that history so that we don’t repeat it or take our rights for granted — ever. And we all need to stand up right now to all those in our Congress, statehouses and across our country who are trying to take away and suppress the right to vote and who are refusing to honor the sacrifice of all those who died to gain this fundamental American right. Shame on them and shame on us if we don’t act to protect that right for all.

What do you consider some of the greatest triumphs in the arena of child welfare of the past 20 years? What are the essential things that remain undone?

We’ve made great progress in some crucial areas — for example, expanding health coverage for uninsured children. Thanks to Medicaid, the Children’s Health Insurance Program (CHIP), and new options offered by the Affordable Care Act, the number of uninsured children is at a historic low. But much is still left undone, starting with ending child poverty in the richest nation on Earth. It is a national moral disgrace that there are nearly 3.9 million poor children in the United States of America — the world’s largest economy (288,564 poor children in South Carolina). It’s also unnecessary, costly and the greatest threat to our future national, economic and military security. If America’s dream continues to fade for millions of poor, near-poor and middle-class children and families, work and wages continue to decline, and education and basic survival needs — including adequate food and housing — continue to be ravaged to protect the powerful interests of the top 1 percent, then America will miss the boat to the future. More importantly, we will miss a great opportunity to be a beacon of hope and justice in a majority nonwhite and poor world desperately in need of moral example. To those who claim our nation cannot afford to prevent our children from going hungry and homeless and prepare all our children for school through early childhood development supports, I say we cannot afford not to. If the foundation of your house is crumbling you must fix it.

What do you hope today’s college students will take from your book? Is it the same thing you hoped they learned 24 years ago?

I hope they will still take away the key lesson that it’s up to them to make a difference and create the nation and world they want to live in. Dr. Martin Luther King Jr. and Nelson Mandela and Gandhi are not coming back. Today’s young people must pick up the torch and become the informed and caring leaders of the next transforming movement against bigotry, intolerance and violence and towards justice and equality for all.