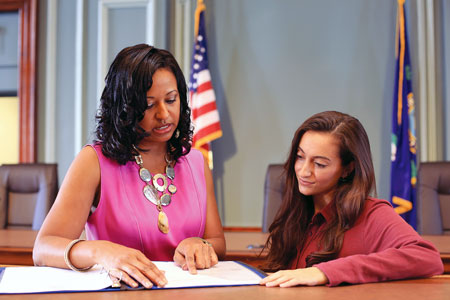 Teresa Wilson, left, works with UofSC journalism student Allison Sansone. Wilson says she likes to point out local opportunities to students who might overlook them. “I purposefully tell them, ‘The sky’s the limit and do what you want to do, but don’t blow off an experience that might be right in front of you just because you might be here, or your parents are here, and you want to get away. Give yourself that opportunity to see how having that support system around you and taking advantage of what’s right here might be one of the best things you ever did.”

Teresa Wilson was never one of those kids itching to leave town. She liked growing up in Irmo, S.C.

She chose the Honors College for undergraduate studies, '96 English, and the USC School of Law, '99, afterward. Now, as she watches Columbia literally rising all around her, she knows her decision to stay home was right for her.

“There were opportunities for me at various times to go on a different path, but I really have enjoyed the changes and growth I’ve seen here,” said Wilson, Columbia’s city manager since January 2013. “It is very fulfilling to touch that growth and help run and grow a city and be part of this tremendous experience of transforming it.”

Columbia’s motto is “Together we will build a world-class city,” and  as Main Street’s renaissance marches northward, a baseball stadium opens  at Bull Street and apartments for students and professionals reach skyward, it’s clear the capital city’s time is now. For Wilson, ’96 English, making sure services keep up with the growth is critical. So is not letting less fortunate neighborhoods slide.

“They want to grow just as much,” she said, noting she attends community meetings weekly if not daily. The personalities she works with — from citizens and employees to the council members who set policy — have taught her valuable people skills. “In the work I do, the answer is often no, but I try to find alternate solutions,” she says. “Often it’s not what you’ve done but how you treat people and how you communicate. I really put a lot of emphasis on relationship building and problem solving.”

Those skills served her well last October when floods destroyed homes, businesses and roads in Columbia. Working around the clock, Wilson and her staff made sure residents stayed safe. Conserving the city’s water source was paramount, and knowing the flood was coming, she planned ahead to not lose water. “Sometimes you get criticized for overkill, but I err on the side of caution,” she says. “It was hard to be under a systemwide boil water advisory, but the reality is we never lost water. Never.”

While “resiliency” is her word for Columbians during the catastrophe, Wilson was privately gratified to learn her managing skills worked. Her philosophy? Don’t micromanage. “I let them work. I know I have to make decisions and I don’t shy away from doing that, but the flood reiterated for me how important it is to own my management and leadership style, which is to work as a team,” she says.

Only the earlier search for a new police chief was as challenging. With Skip Holbrook hired in 2014 and flood relief efforts continuing, Wilson is now refocusing on Columbia’s other needs. Earlier she’d secured tens of millions in grant dollars for public safety and leveraged $425,000 in federal funds to create more than $6.1 million in private downtown investment. City managers are “worker bees who navigate big staffs and big budgets and try to make citizens and policy makers proud,” she says.

While numerous awards have come to her and Columbia since stepping into the city manager’s office, Wilson says the true reward is watching a vibrant city flourish. “I’m really driven to see a lot of things we’ve been working on happen. I do believe it is happening right in front of our eyes.”