UofSC offers class on business side of growing e-sports industry 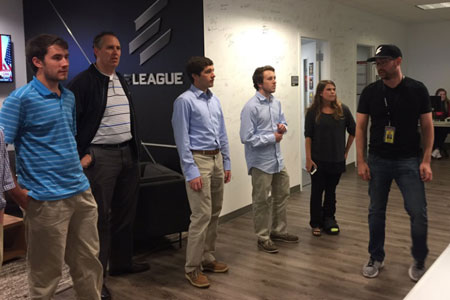 UofSC is among the first, if not the first, to offer students a chance to take a class on the business side of e-sports. Mark Nagel is teaching graduate students about it this semester.

Video games have been big business for decades now, but as technology advances, the line between the games and traditional sports is disappearing. Yes, it is now possible to turn pro as a gamer. The new world of e-sports is helping redefine sport management in the post-millennial era, and University of South Carolina students, faculty and alumni are leading the way.

Kenny Sugishita earned his master’s degree in sports management in 2015 at UofSC’s College of Hospitality, Retail and Sport Management. Working with Mark Nagel, a professor in sport management, he wrote his master’s thesis on e-sports, and a career was born.

“I had to research a lot about it and once I became educated about the space from a macro level, I saw how huge it already was and just wanted the opportunity to get in on the action,” Sugishita explained. “For me, it just made sense looking at current (younger) generations that are growing up with video games as part of their everyday lives, compared to baby boomers who would typically think of games as a form of entertainment outside of their homes. So it was appealing to me because it made sense that younger generations would enjoy and appreciate gaming as more than just a form of entertainment.”

E-sports, for the uninitiated, are video game competitions which have become a spectator sport. Many of the most popular games are ones played by teams, such as League of Legends and Dota 2. How popular is it? According to ESPN, 205 million people played or watched e-sports in 2014, and that number is growing by an average of 21 percent each year.

The League of Legends Championship has drawn in-person audiences of up to 40,000, and in 2014 had an online viewing audience of 27 million: more watchers than The Masters, the NBA Finals, the World Series, or the Stanley Cup Finals. Nagel said the growth of e-sports over the last decade has been phenomenal.

"Between about 10 years ago and about five years ago, the industry changed because everything moved toward PC gaming and a lot of these team games,” he said. "You had half a dozen people watching and a very, very fringe element interested in what the results were. Now you have 15,000 people in the Staples Center."

Sugishita is now coordinator of Eleague, an e-sports organization owned by Turner which televises tournaments on TBS and on the Twitch video streaming service. He said Turner is only one of the major companies getting involved in e-sports.

“It’s big business. There are a ton of NBA teams that are buying e-sports teams and celebrity investors that are partial owners of teams,” he said. “The male millennial is a highly sought after demographic and that is our biggest demographic in e-sports, and it’s continuing to grow.”

The class focuses on public relations, marketing, management and other aspects of the business side of e-sports. Some of the students recently took a trip to Atlanta, where Sugishita showed them the Eleague studios and shared his experiences as an executive in the new and growing field.

Nagel said the growth of internet access has boosted e-sports, along with advances in video game technology. Tournaments often offer prizes in six figures now, and while only about two dozen players have become millionaires so far, that number is rising and as Nagel explained, "There's a growing viability."

E-sports also caters to viewers, allowing different looks, different angles. "They're really trying to let the customer online pick how they want to consume the content,” Nagel said. “I think that elements of that are going to be more and more popular and filter into other sports."

Professional e-sports teams typically live together and practice 8-10 hours per day. New players are often offered room and board plus a salary and potential bonuses based on performance. "There's a whole emerging science" related to improving reflexes and attention span for the players, Nagel said.

The UofSC class offers students a chance to seize jobs like Sugishita’s in an industry with a bright future.  The business side of e-sports does not require one to be an expert gamer (Sugishita had little gaming experience). “It will continue to grow, and we will continue to see it span over new viewing mediums (online, VR, TV, etc.),” he said. “Eleague was one of the first organizations to get non-endemic sponsors (Arbys, Credit Karma, Buffalo Wild Wings, Snickers) to buy sponsorship packages for e-sports. I believe that this will continue as more and more investment into e-sports grows.”