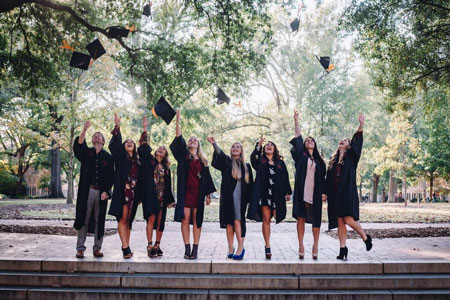 Emily Bethea and her nursing classmates celebrate graduation on the Horseshoe.

When Emily Bethea walked across the commencement stage on Dec. 5, it marked the completion of a dream that began more than a decade ago, as she watched over her mother and infant brother in the hospital.

When she was 10 years old, Bethea saw her mother go into early labor and almost didn’t survive the C-section. Her baby brother suffered a stroke soon after he was born, spending time in the neonatal intensive care unit. There, Bethea saw the work of the nurses, who remained calm amid chaos, who taught Bethea how to feed her tiny brother a bottle, and who celebrated with her family as her brother became well enough to go home.

Bethea knew right then she wanted to be a nurse.

She, along with more than 1,700 others, celebrated Monday as they earned their degrees from Carolina. The 2:30 p.m. ceremony for baccalaureate, master’s and professional-degree recipients was in Colonial Life Arena, where Congressman John Lewis, a longtime leader of the civil rights movement, addressed graduates. The doctoral hooding ceremony was at 9:30 a.m. at the Koger Center for the Arts.

For Bethea, who has accepted a position as a labor and delivery nurse, the road to becoming a nurse has been filled with twists and turns, and it hasn’t always been easy.

After graduating from Socastee High School in Myrtle Beach, she took a brief diversion from her original career path, attending Columbia International University as a communications major. But she couldn’t shake the pull toward nursing and transferred to Carolina as a second-semester freshman.

As a sophomore, Bethea began losing vision in her right eye. A visit to an eye doctor was followed by an appointment with a neurologist. An MRI showed multiple lesions on her brain. She eventually was diagnosed with multiple sclerosis, an unpredictable, often disabling disease of the central nervous system.

Managing her disease and tackling the demanding courses and clinical work in the university’s College of Nursing wasn’t easy. But she knows she was fortunate to have her classmates and Carolina faculty members with her each step of the way.

“I always felt like the university was on my side. They went out of their way to accommodate me. I couldn’t get away with anything; I had to do the work. But any way they could make it easier for me, they would,” she says.

That included support from her classmates, who were always there for her on nursing rounds, reminding her to drink plenty of water, to pay attention to her reaction to extreme heat or cold and to be sure to rest. Her MS symptoms include numbness and tingling in her legs, some back pain and general fatigue.

I always felt like the university was on my side. They went out of their way to accommodate me.

“In the hospital, I’m there for my patients, not myself. But I have to be very aware of what my body is telling me. I’ve learned that as I get tired, I get more symptoms. So, I’ve learned to prioritize sleep. And I’m allergic to caffeine, so no help there,” she says.

She also jumped into learning more about MS, including the importance of fundraising.

“I’m very stubborn,” she says. “When I was diagnosed with this, I thought, ‘I’m going to fix it.’ So, I started looking at different outlets and stumbled on the national MS society.”

She soon pulled together more than 50 friends from school, church and her gym, serving as team captain for an MS walk in Columbia. Her team placed second in the amount of money it raised.

In February, she’ll start work as a nurse on the labor and delivery floor at Palmetto Health Baptist in Columbia. While she originally thought she wanted to work in the NICU, where her brother spent time many years ago, she later changed her mind, realizing a labor and delivery nurse gets to take care of two patients at once — mom and baby.

“I feel like it’s something I could be good at. Celebrating when things are going well, which most of the time it does. But on occasion, things are traumatic, and I think I’ll be good at being with them in their pain, too.”

On Monday, Dec. 5, she was in the Colonial Life Arena, while her family — including her husband, Caleb, a high school English teacher whom she married three days after her 20th birthday, and her parents, Anita and Wes Howell — cheered her on.

“Graduating (in the nursing program) is the best thing I’ve ever accomplished. I’m proud that I made it through. Our program is well-known, not just in South Carolina, but across the country. When they know you’re a Carolina nurse they look at you differently. That’s a huge honor.”