Living and experiencing the world leads to international award

Living and experiencing different parts of the world gave Stefanie Feltwell, an international business and economics senior, a competitive edge to receive one of just 12 Women in Business scholarships from the Zonta International Foundation. Feltwell has used the global and leadership experience she gained at the University of South Carolina to develop her passion for helping others into a future career in international policy and global development.

Feltwell started developing international experience at a young age. Her parents were doctors in the military, which moved her to different places around the world. She even lived in Germany for almost four years, learning German and French while she was in elementary school. She is minoring in those two languages.

“One of the reasons I became so interested in international affairs and traveling is because I grew up in Germany. We lived off the army base, and my parents threw me into a local German school. I didn’t know any German at the time. They said, ‘Go learn,’ so I kind of had this experience of adapting to a different culture and language at a young age. Being able to move and having those experiences is something I’ll never let go of,” says Feltwell. 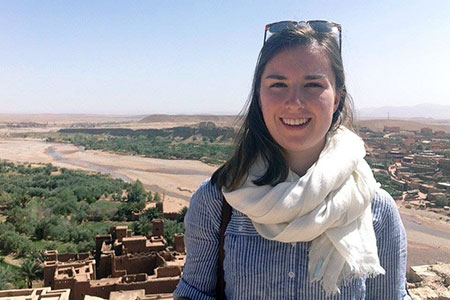 While Stefanie Feltwell was studying abroad in Morocco, she went on a trip to the Sahara Desert.

She also gained more international experience in college through multiple study abroad trips. She went to France and even went to Japan while her family was stationed in Seoul, South Korea. Feltwell was also the first international business student to study abroad in Morocco.

“Morocco was a really welcoming country and so much fun to go and explore,” says Feltwell. “It was a once-in-a-lifetime experience.”

Even on campus, she was able to gain experience and make an impact. Feltwell coached and was treasurer for the women’s triathlon club, which was first in the SEC. She was also very involved in student government, participating on Freshman Council then later became social media coordinator under student body President Lindsay Richardson and volunteer coordinator for Walk Home Cocky.

“Working for that team, we worked on important initiatives like It’s On Us, the sexual assault campaign, trying to create a safer environment for students. And then also the opening of Carolina Closet and Gamecock Pantry, just seeing those programs take off and being able to support advertising them and making sure they were successful was a really proud moment,” says Feltwell.

And through the university’s Office of Fellowships and Scholar Programs, Feltwell decided to apply for the Zonta scholarship, an award promoting women in the professional workplace throughout the business world. She had to go through regional and district levels of the award before she was able to reach the international level for the scholarship and was one of the 12 recipients to receive this award.

“My goal is to go into international relations and put my business degree towards an international policy and global development career,” says Feltwell. “Zonta supports professional women, women’s rights and progress for women as professionals. So it was a great way to gain support as a woman who wants to go in to the professional field and get support from an organization that supports so many charities and development work.”

Currently, Feltwell is part of the Washington Semester Program, completing an internship with the United Nations Information Center. She will be working on government and media relations for the UN while in Washington, D.C. Her previous internships include one in the Dominican Republic and an internship in Munich for the South Carolina Department of Commerce.

“Being in Germany last summer, I was at the heart of the refugee crisis there and looking at things like Brexit and how we react to these big changes is interesting,” says Feltwell.

Through her research work at the Carolina, she has learned about economic integration of refugees in South Carolina and has found a passion for refugee migration and immigration policy. Her goal is to work in international relations for the UN or a think tank that shapes international and U.S. policy. She plans to either pursue her master’s degree or start working after graduation.