During her senior year in the University of South Carolina’s School of Journalism and Mass Communications in 2010, a professor asked Kara Durrette and her classmates what they planned to do with their lives. 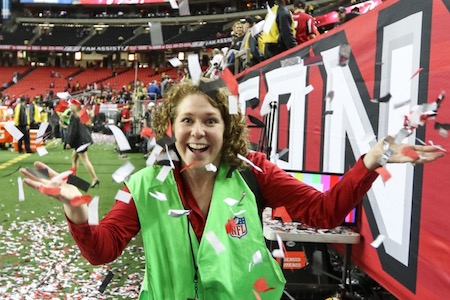 Kara Durrette, '10 journalism, is the digital media producer for the Atlanta Falcons. Here, she celebrates the team's victory in the NFC Championship game. (Photo courtesy of AtlantaFalcons.com)

Durrette’s answer — digital content manager — highlighted her interest in an emerging field combining reporting and technology and elicited a question in response: “What’s that?”

Durrette, 28, is still defining the job in her fourth year as digital media producer for the Atlanta Falcons — and loving every minute of it.

Durrette, who majored in visual communications and minored in media arts, helps maintain the team website, social media platforms and mobile apps as part of the AMBSE Media Group — an integrated communications group including the Atlanta Falcons digital and social media, video and photography teams. She also serves as one of the primary Falcons digital team photographers.

“I use my entire degree every day, so that’s nice,” she says.

Durrette interned with the Carolina athletic department as an assistant digital media producer during her senior semester. She also served as a sports and staff photographer and reporter at The Daily Gamecock. After graduation, she spent a year as visual communications and marketing assistant for the Tampa Sports Authority before a 19-month stint as interactive managing editor at a Columbia TV station.

She landed with the Falcons in 2013. In Durrette’s first season in Atlanta, the team won four games. This year was a different story — albeit one with a heartbreaking ending.

It’s everything I had hoped I might be doing, and I hope I can do it for a long time.

The Falcons lost to New England, 34-28, as the Patriots scored 31 unanswered points to win the first overtime Super Bowl in NFL history. Though still painful, the experience was one Durrette will never forget.

“You can’t ever plan, but every year, you say, ‘We could get there,’ ” she says. “You always believe in your team.”

The journey from training camp in July to the Super Bowl in February was a long grind for Durrette, who managed to coordinate having a baby, Dawson, now 10 months old, in the offseason.

Durrette's son, Dawson, 10 months, made the trip to Houston, but did not attend the Super Bowl.

“We work every holiday. We work every Sunday,” Durrette says. “My husband is a superstar and has done a lot of single parenting.”

The season included what has become the annual tradition of “Bye Week Thanksgiving,” when Durrette gathers with her family on whatever weekend the Falcons’ open date falls. Christmas and New Year’s flew by in a blur as Atlanta kept winning, and in February, Durrette found herself in Houston preparing for the biggest game of her career.

In the days leading up to the game, Durrette photographed practices, media day and events such as the Falcons’ off-day trip to NASA’s Johnson Space Center. She also ran into fellow Carolina alum James Kratch, a writer for New Jersey Advance Media with whom Durrette covered Falcons fullback Patrick DiMarco when DiMarco was a Gamecock.

On game day, Durrette shot the stadium arrival of Falcons coach Dan Quinn, quarterback Matt Ryan and star wide receiver Julio Jones. She was part of a four-person team photographing the game for the Falcons, and also had instantaneous access to content produced by the NFL and The Associated Press.

Throughout the game, Durrette edited and uploaded photos and kept an eye on the automatically updating apps, moving between the field and “the biggest photo workroom I’d ever seen.”

“The scale was huge,” she says. “There were so many amazing journalists and content producers in one space. I met two of the remaining three photographers that have shot every Super Bowl.”

As the Patriots rallied, work Durrette had done on a celebratory photo gallery had to be scrapped.

Durrette is already looking forward to next season, which she expects to be every bit as demanding and rewarding as this one.

“It’s everything I had hoped I might be doing, and I hope I can do it for a long time,” she says.