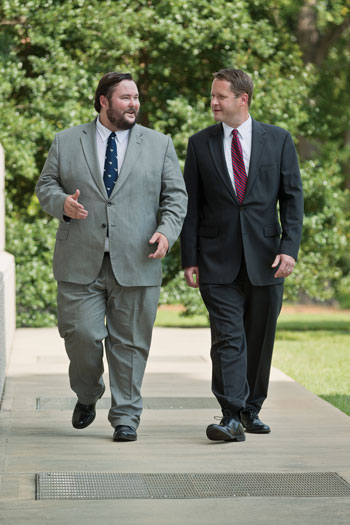 Lonnie Doles, left, and Jack Cohoon work to help those jailed for failing to pay child support clear their records.

This problem has plagued thousands of divorced parents every year in South Carolina; parents who fall behind on their payments for any number of reasons and are then arrested and incarcerated for it. Local law enforcement agencies report these arrests to the S.C. Law Enforcement Division, which in turn codes them as a criminal offense. Now saddled with a criminal record, these parents find it even more difficult to obtain a job and make their payments, causing the cycle to repeat itself.

But the real problem is that arrests for failure to pay are not usually criminal. Rather, they are a civil matter and therefore, should not show up on an individual’s criminal history.

“We’ve been treating people unfairly for a long time,” said 2014 alumnus Lonnie Doles, a former attorney with S.C. Legal Services who now works for McLeod Fraser & Cone LLC. “Obviously, if you have to pay child support and you’re incarcerated, it’s kind of hard to keep a job. Being given an erroneous criminal record on top of it makes it that much harder to even get one.”

Doles first started delving into this issue shortly after graduation, when he was hired by SCLS through a fellowship from AmeriCorps Equal Justice Works. As an Employment Opportunity Fellow, he was charged with providing legal assistance to remove barriers to employment.

“The people who come and talk to me want to support their family. No one wants to let their children go without,” he said.

Doles and Jack Cohoon, a 2006 alumnus and head of the SCLS Employment Unit, sought the opinion of the S.C. attorney general, who stated that failure to pay child support is a civil matter and should not appear as a criminal record.

“We thought we had resolved the matter at that point on a systemic basis,” said Cohoon.

But then a client approached SCLS for help, and after running a background check, a sole criminal record came back: failure to pay child support; clear evidence that the issue had not been resolved.

So together with SCLS senior litigator Kirby Mitchell, Doles and Cohoon took the matter to the Supreme Court of South Carolina, filing a Petition for Original Jurisdiction. While the petition was ultimately denied, the filing did prompt SLED this past spring to change its policy and stop collecting and reporting civil child support nonpayment on its SLED CATCH criminal record histories.

It also authorized the removal and modification of civil contempt CDR codes, the electronic codes used by arresting agencies to designate the reason for arresting an individual. This change ensures that any future attempt by an arresting agency to upload a civil nonsupport record will be flagged and removed from the SLED criminal record database.

Additionally, the litigation prompted SLED to reform its training policy regarding the submission of criminal history information by arresting agencies. SLED is now generating and distributing new policy information to all of its S.C. criminal justice partners.

“This was a dire issue that needed to be addressed,” said Cohoon. “It’s a big win for criminal record reform in South Carolina and will help thousands of South Carolinians who have experienced this kind of arrest to regain employment more easily and support their children.”