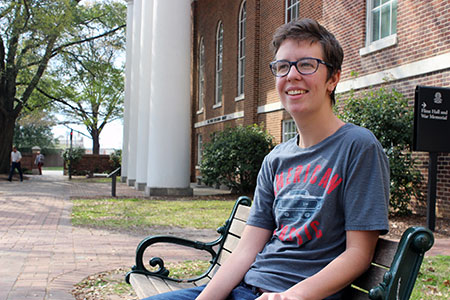 Even as a child, Julia Hogan was a storyteller, making up yarns to entertain her younger siblings. By the time she was in middle school, she was writing short stories.

“My parents noticed I had a talent for it and a voice they thought was interesting,” Hogan says. “I took to it. I really loved writing.”

After two years at the South Carolina Governor’s School for the Arts and Humanities in Greenville, where she focused on creative writing, it was time for her to decide on a college and an area of study.

She chose the South Carolina Honors College and science.

“I really love science. I love learning about the environment and all the different processes,” she says. “I thought if I went into the sciences, it would inform my writing more.”

Hogan will graduate in May as a marine science major, but writing remains her passion. So much so that her short story, “This Is Where I’d Start Again,” won this year’s Elizabeth Boatwright Coker Student Prize in Short Fiction from the South Carolina Academy of Authors.

The story tells of a family’s reaction to the death of a child in a car accident, and the journey of the dead boy’s brother to rebuild the car and remake his life. It is taken from a series of short stories Hogan is writing for her Honors College senior thesis, which all center around a small town in South Carolina. The town, because of climate change, is experiencing 1,000-year floods annually, and Hogan delves into questions about what a changing environment can mean to a place and its people.

“I like answering questions through writing. That’s one of things that drew me to research. You have a question and you’re looking for answers,” she says. “A story starts with an idea or question or character and then you find out where that goes. That’s what I really like -- developing characters and places, falling in love with places that may or may not be based on a real place.”

Hogan grew up in Greenville and has spent her life in South Carolina, with a semester abroad in Scotland, a summer doing marine science research in Rhode Island and a stint at the Iowa Writers Workshop.

“I’ve lived outside of South Carolina for brief periods of time. Those experiences have taught me how much l love the South,” she says. “If you want to write, living in the South, it’s handed to you on a silver platter. You don’t have to go anywhere.”

She says the University of South Carolina has been supportive of her journey, allowing her the chance to do undergraduate research and study abroad while connecting her with faculty mentors and editors. After graduation, she plans to work for a year or two before heading to law school or pursuing a Master of Fine Arts degree.

“People ask me why I write, or they say, ‘Why do you think people care what you’re writing down?’ ” she says, “I write because it’s what I’m driven by. It’s like I can’t not do it. So, whether or not I get published or win awards is a moot point. That’s kind of like something extra. That’s gravy. The writing is the biscuits.”

“The police brought the Celebrity back to us. It was mangled, hard to look at, but my father left it in the yard anyhow. Wisteria grew over the fenders, and animals rooted in the torn upholstery. Kids came and stole the hubcaps and anything else shiny. I didn’t know what my father did with the key, if he lost it or kept it hidden in a secret place. He used to sit out on the front steps in the evenings and drink bourbon and watch the Celebrity, like it was a TV show or a particularly good movie, like it was telling him stories. One day, after years of this, my mother decided it was time to get him up. My sister, Trinity, and I were sitting in the living room, watching a television show about aliens. My mother went out the door, letting the screen slam shut behind her. Through the window, I could see her.”