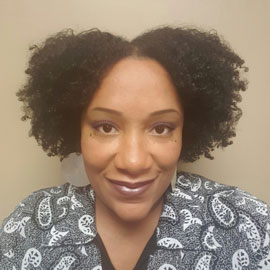 Melonee Hayes completed her degree in human services from USC Beaufort in two years while working full time and raising a daughter.

People have always told their problems to Melonee Hayes, but she never thought she would make a career out of her instinct for empathy.

“People would say, ‘You know what? You should be a counselor. You give some pretty good advice,’ ” Hayes says. “I was like, ‘Nah, I want to go into the medical field.’ ”

That perspective changed as Hayes earned a medical office administration certificate at Midlands Tech, where she also worked in the college’s counseling office.

“After I really knew the counselors and how important they were to the students here, I thought, ‘I want to do that,’ ” she says. “I think I have the knack and the skill set. I think I can make a difference.”

At first, Hayes wasn’t sure how to make that happen. She completed her associate degree while working and providing for her 11-year-old daughter, Jamerica. The thought of obtaining a bachelor’s degree seemed daunting.

Then a classmate told her about Palmetto College, the University of South Carolina’s online bachelor’s degree completion program. Intrigued by the flexible schedule, Hayes enrolled.

“I’m the first in my family to ever get any degree,” says Hayes, 35. “I have my daughter looking up to me, and my nieces and nephews. I have some trying days, but I can’t give up.”

Hayes has always been determined, even when her future wasn’t as clear. With no family history of higher education, college wasn’t foremost on her radar as she worked a series of jobs after high school in the Lowcountry.

“I had so many different careers,” she says. “I was doing 911 dispatch for the sheriff’s office, and I realized, ‘I can’t do this anymore. This cannot be it.’ ’’

Hayes’ father owned his own construction business, and she says she never went without growing up. But seeing the seasonal ups and downs of her dad’s career further motivated her to take the first steps toward greater security at Midlands Tech.

Najmah Thomas, an assistant professor of human services at USCB, sensed Hayes’ drive through the computer screen. Thomas says Hayes was always willing to ask for help — a key component of being a successful online student.

“She would send an email and say. ‘I know you’re very busy, but I just wanted to get clarification,’ ” Thomas says. “I had to tell her one time, ‘That’s what we’re here for. You email anytime.’ It can feel very lonely there at your computer. You can feel like no one is with you.”

Thomas, who is looking forward to meeting Hayes in person at graduation, has a firsthand understanding of such struggles.

“My son was 3 when I started my educational career, and it took a really long time,” Thomas says. “I can understand what [nontraditional students] are going through. They’re not just doing school. They’ve got work, their kid got sick. Trying to manage the responsibility of full-time work, full-time parenting and full-time school — I understand that from a personal perspective, so it’s extremely rewarding to see our students, especially if they’re first-generation, reach that milestone.

"Children see mommy’s always doing her homework, and now they can see her walk across the stage.”

Hayes says Thomas’ teaching included helpful real-world examples and frequent encouragement. In addition to the support of family, friends and co-workers, Hayes credits Palmetto College adviser Tara Dakolios with helping her manage her class load and stay on track with her schedule.

“Melonee was very conscientious about making sure that she was balancing everything so that she could be as successful as she could be in her classes along with her personal life,” Dakalios says. “She’s always very enjoyable and easy to talk to. She’s just got a great personality.

“She stayed on top of everything. She came in and she took care of business. I’m excited to see what her next steps are.”

Hayes’ immediate future includes starting graduate school in August, a month before Jamerica’s baby brother is due to arrive on Sept. 22. She doesn’t intend to take five classes a semester this time, though.

“I know my limitations,” Hayes says. “I’m not Superwoman.”

Some of Hayes’ family members, including a niece who has started to talk about following in her educational footsteps, might disagree.

“I’m happy that I have littles ones looking up to me now,” Hayes says. “I have to keep on going, no matter what.”