Brandon Johnson decided he would study law and work to help young people in his community the day his older brother went to prison in 2009. His desire to fully understand what his family was dealing with during the time sparked a passion in his mind to dig deeper and begin understanding the legal system. Eight years later, Johnson is well on his way to that goal thanks to the Council on Legal Education Opportunity.

“I was not really interested in law as a child,” Johnson says. “My brother was sentenced to get out of prison in 2017, the year I knew I would be going to law school, and I realized that the field of law was pretty open. I just told myself to go for it.” 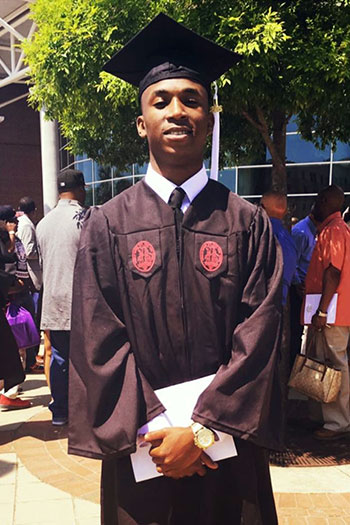 Brandon Johnson graduated with a bachelor's degree in political science in May 2016.

The Sumter, S.C. native was eager to begin his journey, and he knew the University of South Carolina would be the best fit for his studies. One driving force behind his decision to attend: the South Carolina Statehouse, which is just a few steps from campus, where Johnson knew he would be able to meet and connect with many influential people. As soon as Johnson settled in his freshman year, he began searching for opportunities that would lead him to the walls of power. In only four short years at Carolina, Johnson connected and worked with many prestigious people like Columbia Mayor Steve Benjamin and South Carolina House Speaker Jay Lucas. He also volunteered with City Councilwoman Tameika Isaac Devine.

“The amount of experiences and opportunities that I was able to gain while at Carolina was really tremendous,” Johnson says. “I tried to seek out as many opportunities as possible. I was a senator of the Residence Hall Association on campus and I was involved with the College of Democrats at USC. I also completed an internship with the Human Affairs Commission and got to work alongside different legislators. There were so many opportunities for me to really grow and learn more about law while at Carolina and I’m thankful for that.”

After graduating with a political science degree in 2016, Johnson, like many other students, took a year off from school but continued learning from those around him. During his year off, he continued his work at the Statehouse as a legislative aide while working part-time at Sykes and volunteering at a Sumter-area middle school. With a keen interest in local and state politics, Johnson plans to become a criminal defense attorney and ultimately aspires to become a judge. His goal is to give back to the community.

“I really just want to help people. I’ve seen a lot of young kids in trouble with the law, and I feel that by serving in the government I’ll be able to inspire younger kids and lead them on the right path. My little brother really inspires me to be great. He is the salutatorian of his high school this year and I just want to do my best for him," Johnson says.

Now, Johnson will have the opportunity to further his dreams in the next step of his journey as a participant in the Council on Legal Education Opportunity's Legally Inspired Cohort program. This highly competitive program is designed to help prepare students from diverse backgrounds for law school through a residential summer program that includes an online seminar and four weeks of study and team-building exercises. In the end, participants are provided a mentor, a scholarship to help cover tuition for law school and guaranteed acceptance into one of four partner law schools. Only 20 students nationwide are accepted into the program each year.

“I was so excited when I learned about my acceptance, I burst into tears,” Johnson says. “I felt like a national champion. This is a God-given opportunity and I’m really blessed to be in this position. I’m so grateful for the chance to represent USC in this light, I just feel awesome.”