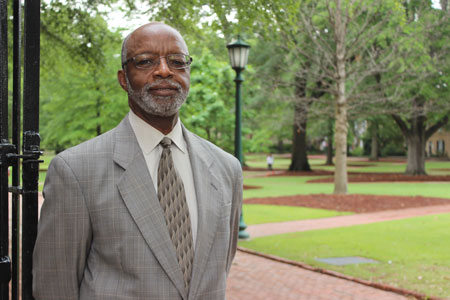 Cliff Scott is the new director of the university's Office of Equal Opportunity Programs.

Cliff Scott is the new director of the university’s Office of Equal Opportunity Programs – a job he accepted for its challenges and because it would allow him to contribute to the university in a new way.

“I’ve always liked working for USC. I enjoy the academic environment and I enjoy the people I have the opportunity to work with,” says Scott, who also earned his undergraduate degree in political science from Carolina. “You can say there’s not a more intellectual environment in the state than in a university setting.”

The EOP office has a range of responsibilities, including making sure Carolina is in compliance with federal and state anti-discrimination laws and with the university’s own policies. It also conducts training to ensure students, faculty and staff are informed about anti-discrimination standards, and it investigates allegations of law or policy violations. The office also advises the university on affirmative action requirements concerning faculty and staff hiring.

Over the past few years, public attention has focused on Title IX cases dealing with sexual harassment and sexual assault on college campuses around the country. Title IX is the federal civil rights law that prohibits sex discrimination in education.

“Sexual harassment and assault all fall under Title IX, and that’s a very, very prominent issue that most colleges and universities are grappling with today. The majority of the complaints in the last year have been complaints that would fall under the umbrella of Title IX cases,” he says. “That’s the most active or hot topic issue that colleges and universities are dealing with, and USC is no exception.”

Scott says his office works to be sure students are comfortable to report cases and ensures students are protected.

“One of the things that’s most important to us is that when people are victimized by sexual harassment or violence that the university provides the assistance they require. That means investigating it as quickly as possible and that a resolution is reached as soon as possible,” he says. “Our role is one of service. We are serving the university community and that primarily is our students.”