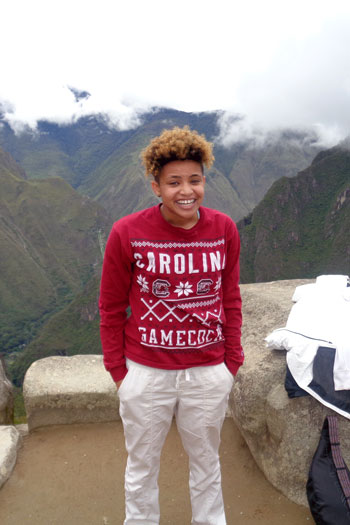 "A college study abroad trip to Belize with watershed ecology reminded me that I wanted to do a career working outdoors, specifically with geoscience.” — Akilah Alwan

Akilah Alwan first realized her passion for the environment and geosciences at the age of 6. While other girls found dolls fascinating, Alwan chose exploring the outdoors and getting dirty. It also put her on a path that would be realized in college.

“I always liked the outdoors. I was always curious and liked research. A college study abroad trip to Belize with watershed ecology reminded me that I wanted to do a career working outdoors, specifically with geoscience,” says Alwan, a Ronald E. McNair Scholar at the University of South Carolina.

Her studies also led to a more personal realization — that she, as one of few African-Americans pursuing a degree in environmental and marine science at the university, reflects a national trend of under-represented minorities in the science, technology, engineering and math (STEM) fields.

That lack of diversity in a growing geoscience field was disheartening to Alwan.

And with a curiosity and determination instilled by her mother, the 19-year-old set out to encourage more minority students to study geoscience by starting a high school outreach program.

“I've done research projects on sustainable tourism, microbiology and marsh grass biology, but the most impactful thing I've studied is diversity, specifically in the geosciences,” Alwan says. “Part of our Carolina Creed says ‘to learn from the differences in people, ideas and opinions.’ It requires diversity throughout our campus. Bringing in diverse students brings in diverse ideas and when people from different cultures and backgrounds put their minds together something powerful can be created.”

In the upcoming school year, the Marietta, Georgia, native will spend nearly two months working with a group of low-income, minority South Carolina high school students, helping them with college applications and advising them on different career and education opportunities in the geosciences (atmospheric science, environmental science, marine science, geology and geophysics). Her ultimate goal is to encourage them to study at the School of the Earth, Ocean and Environment at Carolina.

“One of the biggest reasons why minority students do not choose to study geoscience in college is because there is no minority representation. It is hard to pursue a field when you believe you will be the only minority there. There are so many minority students who feel they don't have what it takes or the right resources to follow their curiosity in the geosciences at the college level,” Alwan says.

She says it also will benefit the communities where they grew up.

“It is important for minorities to study the geosciences as a social justice issue as well. Often times, low-income communities are located in areas where they are vulnerable to natural disasters such as flooding. This is why it is important that we understand the environment we live in.”

She plans to pilot her six-to-nine-week program at Fairfield Central High School in Fairfield County, South Carolina, where she has done service work previously. With the input of the school’s science teachers, Alwan has designed a program that will launch this year.

Plans call for the program to include labs, workshops, college application assistance and mentoring — all aimed at creating a pipeline of students in atmospheric science, environmental science, marine science, geology and geophysics.

”I want to show them that if I can do it, they can do it, too,” says Alwan who began working with university’s Office of Sustainability during her freshmen year. She says that experience fed her passion for sustainability, ecotourism and reducing waste and for volunteerism as an answer for creating change.

“I think the biggest impact USC has had on me is that as a Gamecock, my curiosity has no limits. I've always been encouraged to follow my curiosity, which is what led me to USC and the School of the Earth, Ocean and Environment.”

After graduating, Alwan plans to pursue her doctorate so that she can continue to teach and inspire others, particularly students from low-income communities.