Mark Kingston knows what it takes to win a college baseball national championship, and he intends to use that knowledge to return the University of South Carolina to familiar territory.

Kingston, the head coach at the University of South Florida for the past three seasons and an assistant coach on the Miami squad that won the national title in 2001, is settling into his new surroundings in Columbia after being named the Gamecocks’ head coach on June 30. He replaced Chad Holbrook, now the head coach at College of Charleston, who compiled a 200-106 record in five seasons. 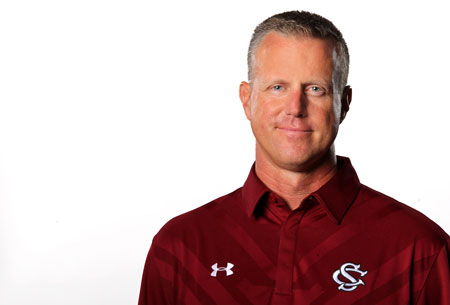 New South Carolina baseball coach Mark Kingston has been to the College World Series as a player and as an assistant coach. In 2001, he was on the Miami staff when the Hurricanes won the national title. He hopes his first-hand championship experience helps the Gamecocks get back to Omaha.

South Carolina missed the NCAA tournament twice in the last three years — hard-to-stomach results for a program that won back-to-back national championships in 2010 and 2011.

“I saw everything it takes to win a national championship from the inside out at Miami,” Kingston says, seated in his spacious office overlooking the Founders Park field. “I saw first-hand what it takes — the type of players you need, the type of preparation it requires. I was at the University of Miami for two years, and that was my master’s degree in college baseball.”

The Gamecocks, coming off a 35-25 season that left them homebound this past spring instead of vying for a return trip to the College World Series in Omaha, return leading hitter Jacob Olson, a junior college transfer who hit .294 as a sophomore. Carlos Cortes also returns after earning all-freshman Southeastern Conference honors after batting .286 with 41 RBI.

Pitching presents more of a question mark. Ace Clarke Schmidt, 4-2 with a 1.34 earned run average in nine starts as a junior, signed with the New York Yankees. No. 2 starter Adam Hill, 3-6 with a 3.04 ERA, returns, though Kingston has said Hill will have to earn a No. 1 spot.

“At this point, I don’t know exactly what we have on our team because I haven’t seen them in action live, so from a recruiting standpoint, we’re just trying to get a little bit of everything,” Kingston says. “We’re trying to make sure that our pitching staff is where it needs to be, and then from there, every year, you sign a couple of infielders, and couple of outfielders, and a catcher.”

“The long-term vision is to get to Omaha, to win another national championship for this great university. I’ve been there as a player, as an assistant coach and as an associate head coach. The last part of that cycle would be to go as a head coach.

Kingston’s USF teams went 100-78-1 in his three-year tenure, making two NCAA Regional appearances. The success he established, along with his family’s contentment in Tampa, meant leaving that program would require an opportunity too good to resist.

“To leave what we had in Tampa, it would have to be one of the very unique and special opportunities in the country,” says Kingston, who was sold on the Gamecocks by athletic director and esteemed former baseball coach Ray Tanner and university President Harris Pastides. “When I came in here and I met Coach Tanner and he showed me around and I met our president, it was clear that this was one of those special, unique opportunities.”

As for the pressure that comes with an office in a building decorated with oversized pictures of players hoisting a national championship trophy, Kingston welcomes it.

“I think it’s great,” he says. “The reason the expectations are high is because resources are high. We have a great facility, we have great fan support, we have great tradition, we have great access to players. Obviously, our fans’ and our school’s highest goal is to try to get to Omaha and win it, and the coaching staff here shares that goal.”

Kingston, 253-180-1 in eight overall seasons as a head coach and a member of the 1989 North Carolina team that won the ACC championship and advanced to Omaha, says he’s quickly gotten comfortable wearing garnet. He and his wife, Letitia, and three children — Cameron, Kailyn and Kate — are house-hunting and eager to begin making themselves at home in Columbia.

“The long-term vision is to get to Omaha, to win another national championship for this great university,” Kingston says. “I’ve been there as a player, as an assistant coach and as an associate head coach. The last part of that cycle would be to go as a head coach. I think I’ve come to a place that gives us a great chance to do that."