Statistics major shines on the soccer field and in the classroom

The University of South Carolina women’s soccer team is among the nation’s best on the pitch, and the players also take seriously their roles as student-athletes. 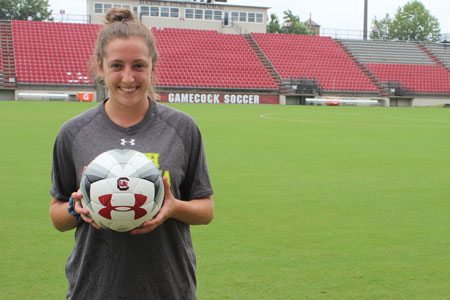 Sophomore soccer player Rebecca Koch is pursuing a degree in statistics at the University of South Carolina.

Consider sophomore Rebecca Koch, a center midfielder who played defense her freshman year. Koch is the only Carolina athlete pursuing a degree in statistics. She originally planned to major in engineering, but a conversation with a statistics professor — and a little input from her mother — opened her eyes to the possibilities of majoring in stats.

“I’ve always loved math. I hate English. I hate history. But I love math. It makes sense to me,” says Koch, a sophomore from the Chicago suburbs.

During a visit to an academics fair at Carolina, her mother stopped at a table and picked up some information about statistics. She said to her daughter, “You like math and business. This could be perfect for you.”

Koch started asking questions and learning what the curriculum looked like for a statistics major, and found out it required a lot of courses in calculus.

Soon, she was in the College of Arts and Sciences, majoring in statistics on the actuarial science path, with a minor in risk management. She envisions a career using her degree to work on risk factor determinations with an insurance company.

Balancing a demanding major with a full training, practice and game schedule all comes down to time management, she says. She cuts back on her schedule during the fall season, taking four classes instead of the five she takes during the spring semester. She also came to Carolina with some Advanced Placement college credits from high school and took a summer class to stay ahead.

“We have time to do any major, we just have to take advantage of all the help that’s offered,” Koch says. “I’m at The Dodie all the time.”

The Dodie is the Dodie Anderson Academic Enrichment Center, where student-athletes can work with tutors and mentors or just find a quiet space to do homework. Koch, who has a 3.7 GPA, says she enjoys the structure of the academic center.

And she says her coaches and teammates, who had a team GPA of 3.43 in the fall 2016 and spring 2017 semester, are instrumental in helping her maintain that academic focus. The soccer team supports each other on the field and off, she says, with academics playing a large role. While Koch is the only statistics major, her teammates are focusing on majors including international business, exercise science, visual communications, pharmaceutical science and biology.

“We all hold each other accountable,” she says.

In high school, she did her homework when it came time to pick a college, considering athletic scholarship offers from many universities. Carolina was a perfect fit.

"I like everything about it. I never want to leave. The coaches (Shelley and Jamie Smith) have a huge play in that, they’re a husband-and-wife team, and we’re all like a family,” she says. “When I came down here, everyone was so friendly; it’s that kind of program. And it’s a program that’s making its way to the top.”

The No. 3-ranked Gamecock women’s soccer team, with a 14-1-1 record, plays its final regular season game Thursday at Florida. The SEC tournament begins next week in Alabama.