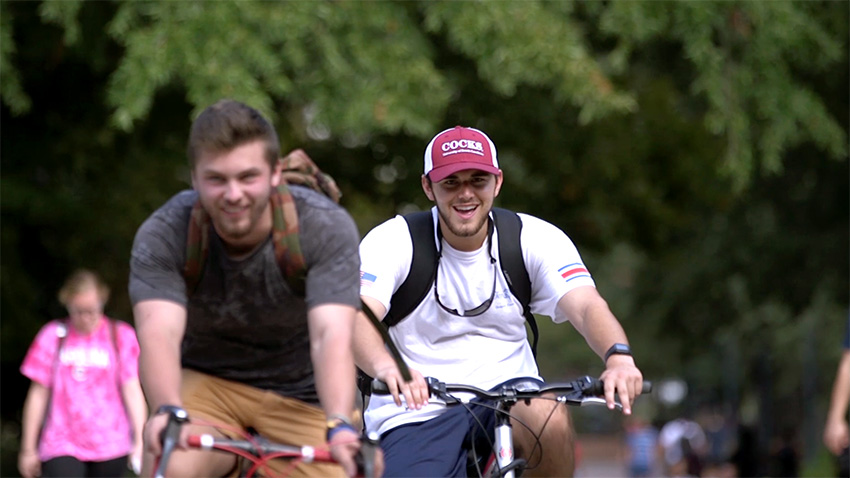 Life on an urban campus comes with lots of traffic. But it’s not just car traffic, especially these days, and it’s not all bad. With the surge in private and public-private student housing downtown, and improvements to bike lanes and shuttle service, the campus commute doesn’t have to be a headache. In fact, for many students, ditching the drive provides a welcome improvement to quality of life.

The concentration of student housing downtown is also creating new avenues for pedestrian traffic, particularly to the north and west of campus. In the process, USC is reshaping the landscape underfoot.

Hang out on the grounds of the South Carolina State House some morning and you’ll see them in droves — USC students, sometimes five or six at a time, strolling from the Hub to campus and back to the Hub via the bustling sidewalks of Main Street. 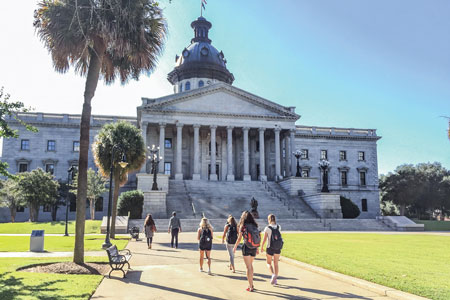 UofSC students cross the State House grounds on the way to morning classes.

At 21 stories, the Hub is home to approximately 850 college students, most of them from USC, many of them regular walkers or cyclists. Sophomore early childhood education major Jasmine Williamson is a perfect example.

Williamson moved into the Hub at the end of the summer and doesn’t own a car, primarily for financial reasons. She relies on friends or Uber for longer excursions, but says her most frequent destinations are within easy walking distance.

“It takes about 15 or 20 minutes to get to class, and then I stay on campus until my classes are done,” says Williamson. “It’s not too close but not too far away, so it’s pretty cool.”

Indeed, it’s just .6 miles from the Hub to the Horseshoe, according to Google Maps. But proximity is only part of the appeal to Williamson. The Myrtle Beach native also enjoys the lifestyle that comes with living and going to school in the heart of a midsize city.

“I like the State House area because it’s super-pretty and it feels safe,” she says. “And I like walking past all the buildings on Main Street and seeing everyone out talking and having a good time.”

Of course, not every student cutting across the State House grounds lives at the Hub. Restaurants, coffee shops and other amenities draw students to the increasingly vibrant Main Street district throughout the day. Freshman naval ROTC cadet Pat Byrne is one example.

“If I have to go get something, the CVS is right up the block, or it’s just a short walk to Main Street — everything I need is within walking distance,” says Byrne, who lives on campus in the Honors Residence. “It’s a definite benefit, especially when it’s nice out.”

Byrne, a philosophy and history major, came to USC from Long Island, N.Y. and credits being on foot so much with enhancing his social life.

“You see people around,” he says. “You’re walking by yourself and don’t have anybody to talk to, and then you see somebody from your dorm and just start chatting. You wouldn’t have that opportunity if you  were driving.”

Hospitality major Miranda Fitzgerald can relate. The senior lives at The Station, closer to Five Points than Main Street, but was on her way to work at the Capital Vity Club at Main and Gervais. Other days, she traverses the full length of campus, often in the company of one or more of her three roommates.

“We take the shuttle together, and if the shuttle takes too long, we walk,” says Fitzgerald, who sees a definite health benefit to the pedestrian lifestyle. “I feel like it’s an accomplishment every day to see how many steps I can do. Sometimes I get up to 12,000. My roommates and I have  a competition.”

And it’s easy to see how she racks up the steps. Mondays and Wednesdays, she walks to classes at Close-Hipp, the nursing building and the Coliseum, heads to the Strom to work out and then down Blossom Street  to the Greek Village to dine with her  sorority sisters.

It’s a far cry from the car culture Fitzgerald knew growing up in Fort Mill, S.C., but  she doesn’t really miss her former lifestyle, especially considering the hassles and expense of parking in the city.

“I don’t have enough quarters,” she says with a laugh. “My freshman year, I wanted a car because I felt the need to have transportation everywhere, but now that I know the campus so well, I feel like, to some extent, I don’t need a car.”

The route up Devine Street to the Carolina Coliseum from the Green Crossing apartments is just .7 miles and take an average of 15 minutes on foot. The same route, starting at Park Place Apartments is just one-tenth of a mile longer and takes only a minute or so more. 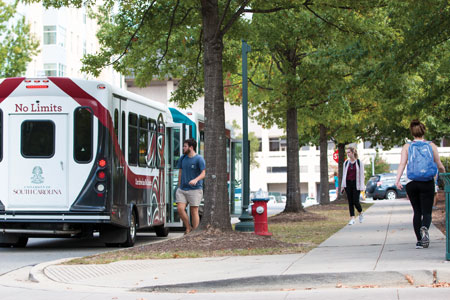 Riding the shuttle is a popular way to get to and from class.

The leafy stretch of Devine Street between Gadsden and the Carolina Coliseum cuts between two city blocks of parking and bisects the 650 Lincoln residential complex, but it’s also the route of choice for students traveling to and from several new student housing developments along campus’s west end.

They walk, pedal bikes or disembark from shuttles. They carry smoothies and subs on the way to class or back to the Park Place or Greene Crossing student apartments, chatting on phones or with each other.

“It’s awesome,” says senior Dakota Danay, an accounting and global supply chain major from Philadelphia who lives at Greene Crossing. “I’m off campus, but I’m still three blocks away, so even though I have more space and more privacy, I’m still able to get to class in 11 minutes.”

Danay spent his first three years on campus and as a resident mentor on the South Quad. He says he walked about the same amount then as now, but his new route offers benefits in addition to keeping him fit.

“I applied to the University of Pittsburgh, and one of the reasons I didn’t want to go there is it just seemed so dirty,” Danay says. “I think part of that was because everybody drove to all their classes. All you could do in the city was drive.”

In Columbia, he does drive to the grocery store and to work, but he goes pretty much everywhere else on foot. “I’ll leave an hour and a half early, get lunch with somebody, and then go to class from there, just because I can, because everything is within a mile radius,” he says.

That lifestyle also appeals to freshman accounting major Zorian Smith, who moved to Columbia from Spartanburg. Smith now lives on campus at South Tower but often visits friends at Park Place and says he walks a lot more than he ever did in high school — and it’s paying dividends.

“I do feel better, health-wise. I feel like my legs are stronger. I breathe better,” Smith says, though he admits to missing the convenience of having a car. “If I wanted to go to Target or something, I’d need my car. I think I’m going to bring it next semester.”

Jasmyne Taylor, a sophomore psychology major from Charleston, doesn’t have a car, either, but enjoys the exercise she gets walking to and from her Park Place apartment and keeps regular track of her steps. Her daily goal is 7,000.

Taylor also enjoys being able to combine exercise and socializing. “A lot of times when you think that no one would be out walking, you see people,” she says. “You’re just like, ‘Hey, where are you going?’ And then you just have a conversation.”