Nothing but blue skies

The forecast for Benjamin Marosites’ professional goals while attending the University of South Carolina went from “foggy” to “sunny and clear” in just one semester. The undeclared major enrolled in the geography department’s weather and climate course, which ignited his curiosity about meteorology, prompted him to change majors and helped launch his career as an emergency planner for Richland County. 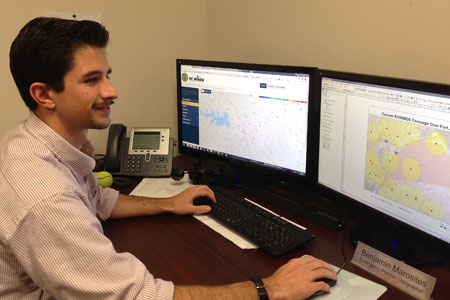 Ben Marosites turned an interest in weather and climate into the beginnings of a career, working as an emergency planner for Richland County in the S.C. Midlands.

Because he took several geographic information system courses at Carolina, Marosites has been able to play a key role in planning locations for future weather data stations in the county.

“I definitely love weather and all the meteorological aspects of it,” says Marosites. “This has been an awesome place to work.”

The county didn’t actually have a job slot open for Marosites at first, but he proved himself during an internship in 2015, providing valuable service during the historic flooding of October 2015. Several months before he graduated, they offered him a part-time position, which changed to full-time soon after.

“His dedication, dependability, adaptability and people skills are just a few of the many qualities he possesses,” wrote Ken Aucoin, Richland County’s chief meteorologist in an assessment of Marosites’ eight-month internship. “We wouldn’t be nearly where we are had he not come aboard and been so diligent and responsible.”

Marosites cites geography professors Cary Mock, Greg Carbone and April Hiscox as among the most influential during his undergraduate studies. “When Professor Hiscox referred to the atmosphere as a fluid, things clicked in my brain,” he says. “Everything started making sense after that; that was the moment that put everything in order.”

Along with making sense of his studies, Marosites found time for fun at Carolina. He had played baseball in high school but didn’t pursue the sport at the collegiate level, choosing to concentrate on his career instead. But he began to miss the sport and got a position as bullpen catcher for the Gamecocks baseball team. Now he’s joining an uncle and cousin in pursuit of physical fitness, competing in 5ks, 10ks and half and full marathons.

And he’s also preparing for broader professional responsibilities in the future. Marosites is enrolled in an online master’s program in geosciences with a focus in applied meteorology. He’s especially interested in what happens to precipitation after it hits the ground.

For now, though, he’s enjoying having a hand in making situations better during weather emergencies, knowing that the information he gathers and disseminates could help a first responder or another county agency avoid trouble in the field. “There’s something new to learn every day,” he says.