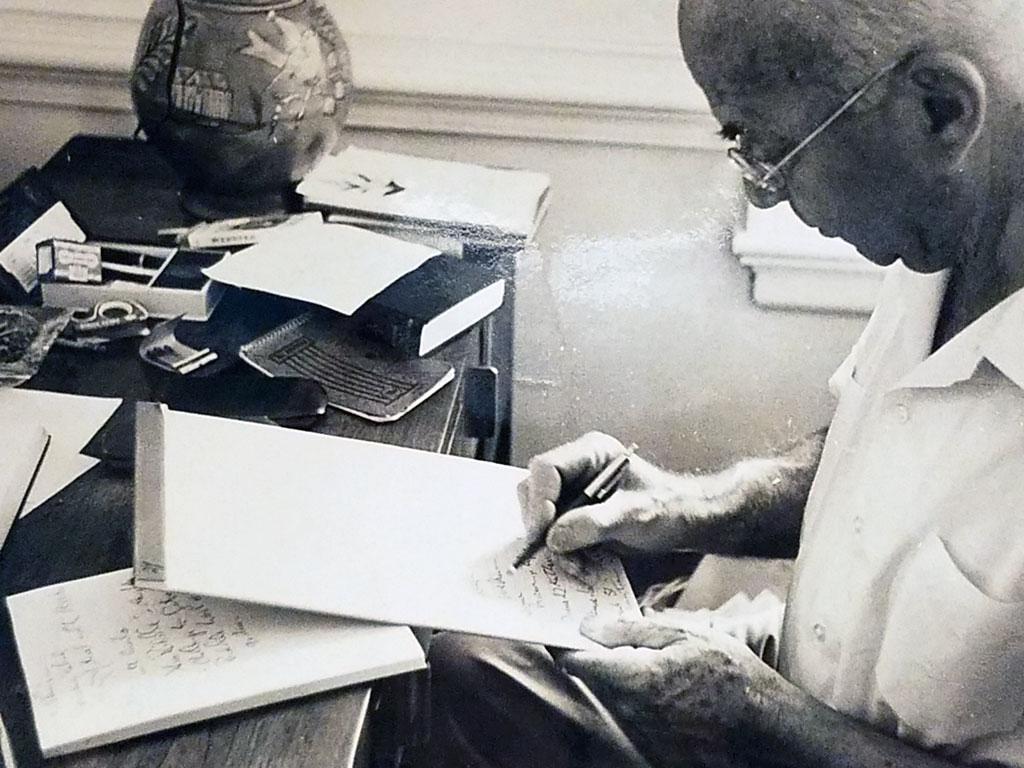 “What’s the most important thing about a writer? What they wrote. How do you find out what they wrote? You go gather it,” says Richard Layman.

Layman, a Columbia publisher and author, has gathered and assembled literary collections for decades.

His collection of John Dos Passos, a “lost generation” author, playwright, artist and political activist, recently has found a permanent home at the University Libraries Irvin Department of Rare Books and Special Collections.

The library will celebrate the acquisition of the collection and launch of a semester-long gallery exhibit Wednesday, Feb. 28. The 5:30 p.m. event will feature a public talk by writer and acclaimed Dos Passos scholar Townsend Ludington, a professor emeritus of English at the University of North Carolina at Chapel Hill, and author of “John Dos Passos: A Twentieth Century Odyssey.”

Dos Passos, an American post-World War I novelist, is best known for his U.S.A. trilogy, which includes “The 42nd Parallel” and “The Big Money.” A prolific writer, he published more than 40 novels, plays, poetry, biographies and memoirs. His creativity extended to painting, having created more than 400 works of art.

“The books, they’re like candy, they catch the eye,” says Layman. “But the most important component is all the file folders of working notes that Dos Passos accumulated through the years. They will serve as a tremendous research resource, not just for literature but for social history, ethics and more.”

The Dos Passos collection joins the Dashiell Hammett collection, which Layman placed at the library in 2015.

Considered one of the most important voices in early 20th-century literature and art, Dos Passos’ influence is less understood today. Layman is hoping to change that by making his collection available to students and scholars.

Born in a Chicago hotel room to his wealthy father’s mistress in 1896, Dos Passos spent much of his youth in Europe and the Middle East, which fostered his socialist views and criticism of American industrialization and imperialism.

He attended Harvard University, and along with several classmates, enlisted and sailed for France to see World War I for himself. The devastation he witnessed solidified his commitment to activism and telling the story of the people.

Dos Passos worked as an author and wrote in the period of the World Wars and the Spanish Civil War. He traveled extensively, often on foot, and walked, wandered, hiked and caravanned through Russia, Europe, the Middle East, Africa, the United States and Central and South America.

As a social moralist, he was critical of the quality of life in America and focused his attention on the plight of the powerless working class and oppressive governments, unions and corporations.

His travels served as the backdrop for his works, in which he placed characters in historical context, portrayed human struggle and revealed abuses of power.

Toward the end of his life, Dos Passos gave a lecture titled, “The Duty of a Writer." The opening statement was that “The duty of a writer is to tell the truth.”

“Defining the truth and telling the truth was very important to Dos Passos,” Layman says. “He was a very ethical and admirable human being, and I like that a lot.”

The exhibit will run through May 30 in the Hollings Library.