Out of the spotlight but not forgotten 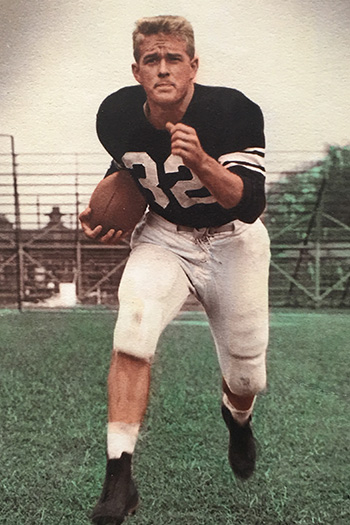 For a man who friends and family say didn’t like the spotlight, W.W. “Hootie” Johnson found himself in it many times.

He helped grow his father’s Greenwood, S.C., bank into a statewide, then national corporation — Bank of America — the country’s second-largest bank. He also led Augusta National Golf Club, home of The Masters, for eight years.

While earning a business degree at the University of South Carolina in the 1950s, he earned praise for his football prowess as what was then known as a “blocking back.”

He served one term in the S.C. House of Representatives and was a chairman of the State Ports Authority. Johnson was also known for his efforts to integrate S.C. schools and supported advancement of minorities and women at his banks.

“One of the proudest things he did was to help colleges and universities in South Carolina desegregate,” his daughter Jennifer Todd says. “He thought everybody deserved an opportunity to get an education.”

Following Johnson’s death in July 2017 at age 86, friends and former colleagues have sought to pay tribute to him through memorial gifts to the university.

Warren Stephens and George Dean Johnson Jr. have committed funds to endow scholarships and a Hootie Johnson faculty chair in finance. Bank of America has committed $250,000 for scholarships to support USC business students of diverse backgrounds, with the first five recipients to be named this spring.

“Hootie and his family were friends of my family since the late 1960s,” says Stephens, whose father, Jack, preceded Johnson as chairman of Augusta National. “My father had a lot of acquaintances, but not many real friends. Hootie was a real friend.”

Stephens remembers much advice from Johnson over the years — some of it unsolicited — but one moment at The Masters stands out. At age 29, Stephens had just become CEO of his family’s Arkansas investment banking firm and his wife had just had their first child.

“He put his arm around my shoulder — and as a former football player, his arm was rather large — and asked ‘How’s your golf game?’ I told him with the new responsibilities at work and the new baby, I didn’t really have time to play. He told me, ‘You take time and play golf with your friends.’

“Now that I’m almost 61, I realize the wisdom he was imparting to me. What he was saying was you have to take time for yourself and your friends. Otherwise, what’s the point?”

Stephens and his golfing buddies now have what they call the Hootie rule: “If it’s a beautiful day and someone invokes the Hootie rule, you better have something you absolutely can’t get out of to avoid playing golf.”

Johnson’s work at Bank of America and its predecessors, including NationsBank, NCNB and S.C.-based Bankers Trust, garnered many friends and fans.

“Hootie was an incredibly strong influence on anybody around him,” says Joel Smith III, former dean of the Darla Moore School of Business and a banker who worked with Johnson for decades.

Now that I’m almost 61, I realize the wisdom he was imparting to me. What he was saying was you have to take time for yourself and your friends. Otherwise, what’s the point?

“I spent 15 years working on the same floor as him and for 10 years, my office was right across from his,” Smith says. “I didn’t so much seek his counsel, but I got it. Mostly we talked about things we were doing outside the bank — community involvement, that sort of thing.”

Smith says he learned much from Johnson’s no-nonsense style during a meeting with a corporate customer asking for many concessions.

“Hootie sat in on the meeting and listened to everything the client had to say, but in the end, he told them, ‘I think we’ve given all that we can’ and that was the end of it. He walked out,” Smith says. “The client felt like they had gotten their day in court. But when judgment was rendered, they knew it was over.

“He was a tough guy, no question about that, but one-on-one, he was very convincing and effective. It influenced a lot how I do business. Give your time and be fair, but be decisive.”

Kim Wilkerson, who was named president of Bank of America South Carolina in 2005, becoming the bank’s first woman president in the state, worked with Johnson for much of her career.

“As a young Southern woman who came into what was a male-dominated industry in the early 1980s, I can tell you firsthand that Mr. Johnson was one of the great leaders who believed that everyone deserved to be at the table,” Wilkerson says. “If you had something of value to say, he wanted to hear it. Today our company’s workforce is made up of over 50 percent women, and diversity and inclusion are fundamental to the way we operate.”

Bank of America’s gift to the university will help support students from diverse backgrounds and help “celebrate a visionary businessman who taught me and many others that hard work, equal voice and diversity of thought are core values to a successful organization,” Wilkerson says. “I can’t think of a better way to carry that legacy forward than to help promote and educate a new generation of diverse thinkers who can be future leaders for our state.”

Johnson also believed local businesses should give back to their communities. That is why he helped start the Business Partnership Foundation at the business school, his daughter says.

“He was the youngest member of the foundation,” Todd says. “He was so young, but so passionate about education.”

It was a passion he shared with George Johnson, an attorney, businessman and namesake of the George Dean Johnson Jr. College of Business and Economics at USC Upstate.

“He believed and I believe that the university has the capacity to change our state and influence the lives of so many people,” says George Johnson, noting that his relationship with Hootie Johnson was like that of brothers.

“He was a bossy older brother, I’ll tell you that,” Johnson says. “He was very to the point. He told you exactly what he thought and that was it. You always knew where he stood. I don’t know of any individual other than my immediate family whose advice I value more.”

Hootie Johnson’s wife, Pierrine Johnson, says her husband would appreciate the tributes if not the attention. “He’d be very grateful,” she says. “He wouldn’t like us talking about him, though. He was a very humble man.”