Where no one has gone before

Jana Liese wanted to go where no one had gone before, at least in the Washington Semester Program, a USC Honors College program that selects a handful of college students from across South Carolina for an immersion semester in D.C. 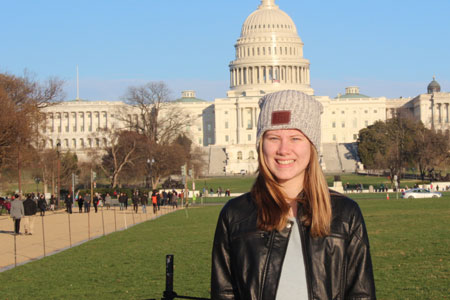 Jana Liese has taken the road less traveled for her Washington Semester Program experience. She landed an internship in a National Institutes of Health research lab.

The sophomore biochemistry and molecular biology major had her sights set on an internship at the National Institutes of Health but learned most students in the program interned in congressional offices or at think tanks or museums. In 27 years, no one had ever landed an internship in a research lab.

“At first, I was a little dejected,” Liese says. “But then I decided I’m going to make this happen.”

Liese, the daughter of Arnold School of Public Health professor Angela Liese, started making calls, contacting six research labs at NIH. She soon found her dream internship — working in the Laboratory of Infectious Diseases headed by Jeffrey Cohen, M.D. He called Bert Ely, a USC biology professor in whose lab Liese had worked since the beginning of her freshman year, and was satisfied that the young undergraduate could be a productive member of his research team.

“I want to do infectious disease as a career,” says Liese, a student in USC's Honors College. “It began in my junior year of high school when I started reading ‘The Hot Zone,’ about the Ebola outbreak in Reston, Va. I thought, ‘This is incredible,’ and then realized I could make a career doing that kind of research.”

Liese’s internship at NIH is tied to research aimed at developing a vaccine for the Epstein-Barr virus, which causes infectious mononucleosis and other serious health conditions for immunocompromised individuals. In the lab, Liese is introducing foreign DNA into mammalian cells to express glycoproteins found on the outside of the Epstein-Barr virus, an important step in development of a potential vaccine. She has also accompanied Dr. Cohen on rounds with patients who have Epstein-Barr-related illnesses.

Liese’s semester in Washington isn’t all lab work. She’s taking a theater class and a current political trends course with the other Washington Semester Program students, but it’s clear that science is her thing.

“I didn’t know what I wanted to do my first year in college, but biochemistry seemed like a good place to start,” she says. “I love being in a lab. I definitely grew up in a family where being curious about things was the norm.”

Before her internship in Washington, Liese says she was dead set on going to graduate school to earn a doctoral degree, probably in infectious diseases. “Now I’m interested in the intersection of clinical research and medicine,” she says, noting that a joint M.D./Ph.D. program might be her preferred route after graduating from Carolina. Of course, that means tough sledding through several years of graduate study, but Liese already has demonstrated that determination can make a way.

“Within reason, you sometimes don’t take no for an answer if it’s something you’ve done your homework on and know that you want to pursue,” Liese says. “So far, that’s what I’ve found that works for me.”