UofSC students and alumnus win big at The Proving Ground 2018

Six teams of young entrepreneurs pitched their ideas before judges and a large audience at the University of South Carolina’s The Proving Ground Thursday (March 29) for the opportunity to win cash prizes and startup support.

The dynamic and fast-paced pitch competition marked the eighth year for the university’s entrepreneurial challenge for students and young alumni. This year’s prize pool totaled $52,000.

Third-year law students Tina Abbasi of Pawleys Island, South Carolina, and Drew Ferguson of Carmel, Indiana, came up with the idea for their business concept after attending several large music festivals. Their concept, Navibās, is a platform that aims to increase access to emergency services at densely crowded events where cellular service is limited. Abbasi and Ferguson won the Avenir Discovery $17,500 prize.

Abbasi already has plans for the team’s winnings.

“The funding that we got from getting first place at The Proving Ground will help us begin to develop the minimum viable product that we need to then pose this to larger investors,” Abbasi said. 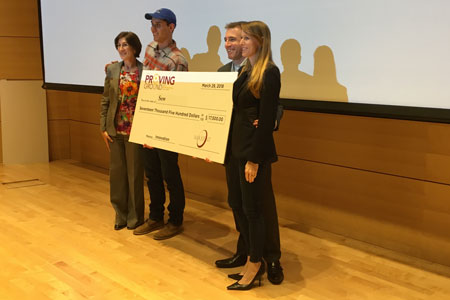 Senior finance student Jason Thomas of Madison, Connecticut, came up with his business concept after having a conversation with a local farmer. His creation, Sow Inc., is an interactive platform that facilitates the delivery of fresh farm products. Thomas won the Maxient Innovation $17,500 prize.

Thomas said his next step is to reach out to farmers across the region to assess their needs.

“The hope right now is to go on a listening tour over the summer and see if I can scrounge up some kids to come with me,” Thomas said. “We will go talk to farmers and try to figure out what they need and what it is we can do.”

The two main prize categories were judged by a panel comprising alumni and entrepreneurs Candice and Aaron Hark, founders of Maxient; and Jill Sorensen, director of SC Launch, a program of the South Carolina Research Authority (SCRA).

The Proving Ground also featured a fan favorite category in which the audience questioned the two finalists before selecting a winner.

Zachary Carlton, a 2015 graduate with a bachelor’s degree in philosophy, pitched his existing business titled Amoya-Agri. The Dallas native’s pre-revenue agribusiness is dedicated to the sustainable production of cash crops in East Africa. The company’s mission is to promote food security and abundance by supporting small and midsized commercial farmers.

Carlton believes the moral focus of his business could have played a role in his concept being chosen.

“I think it’s just a business plan that goes to the core of what people believe in,” Carlton said. “It’s an ethical business plan and one that’s evolved around doing a little more good in the world.”

Dean Kress, director of the Moore School’s Faber Entrepreneurship Center, has directed the competition since the beginning. He said this year’s competition was different for multiple reasons.

“We are seeing more and more technology getting into it, and it was great to have two winners that were agricultural related,” Kress said. “That’s a very important part of the ecosystem and of the economy.”

The Proving Ground began in 2009 with a prize pool of $3,000. Aaron Hark said helping young entrepreneurs is a passion that keeps him coming back every year.

“The talent is here, the ability is here and it’s great that the university has found ways to hold a competition like this every year that caters not just to one area of the school, but is open to the whole university.”

The presenting sponsor for this year’s competition was the Moore School’s Faber Entrepreneurship Center. Platinum sponsors for the competition were Maxient, Avenir and SCRA. Gold sponsors were Fluor and LivePlan.