Caroline Parler Potter thought she had a solid plan when she graduated from the South Carolina Honors College in 1999 and headed to England as a Rhodes Scholar in 2000. 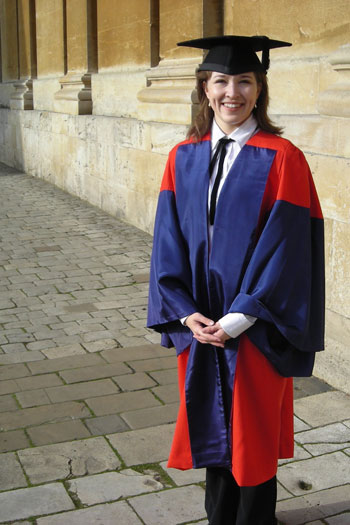 Caroline Potter, who earned a Rhodes Scholarship to Oxford, will return to Carolina on April 20 as the keynote speaker for Discover USC.

A chemical engineering major with a minor in dance, she figured she would spend two years studying at the University of Oxford, earn a master’s degree and return to the United States to enroll in a doctoral program.

It’s 18 years later and Potter is still at Oxford, where she earned her master’s and doctorate in anthropology. Now a medical anthropologist at Oxford, she conducts qualitative research with patients of the UK’s National Health Service and studies health trends at the population level. Her day-to-day work involves developing health questionnaires aimed at improving the lives of people living with long-term health conditions.

How did an engineering major end up as a medical anthropologist? “The short and truthful answer is ‘by accident,’” says Potter, who will return to Carolina on April 20 as the keynote speaker for Discover USC.

She spent her first year at Oxford in an organic chemistry lab, and quickly realized it wasn’t a good fit for her. She was more interested in health applications than in creating compounds in the lab. She noticed an advertisement for a new course in medical anthropology at Oxford, and wrote to the department head asking if she could talk about the program.

After an hourlong conversation, where the department head told her she could combine her lifelong passion for dance with her interest in health care, she enrolled.

“It was a fortunate opportunity that came at the right time to put together two very different interests,” she says. “It was a bit by accident, but a happy accident.”

Although Potter didn’t know it at the time, it was the start of a fundamental career shift and the beginning of what she calls “a significant intellectual journey. I didn’t assume I’d do academic research for all of my career. But it keeps me interested and locked in.”

She said earning the Rhodes took her to places she wasn’t expecting, and gave her the confidence to know she didn’t have to follow a set career path. It also allowed her to realize the importance of surrounding herself with supportive people.

“Having people at USC say, ‘You should go for it,’ ­– that was so important. Knowing you could have the confidence to go into a scary unknown and have people supporting you,” she says. “It didn’t occur to me to apply for the Rhodes until Novella (Beskid, USC’s director of fellowships and scholar programs) suggested it. It goes back to the confidence thing. I didn’t think I was a typical Rhodes candidate. I was surprised when I got through the first round. It’s easy for people to assume they won’t have a good chance or it’s not worth their time. I think if people are genuinely interested, they should go for it.”

As the keynote speaker at Discover USC 2018, Potter says she wants to impress upon students the need to keep asking questions.

“That sounds so basic, but I think it’s really important to never stop asking questions. It’s the basis for any research career — to explore and try to learn more as we go,” she says. “I find it worrying to be in this era of alternative facts where people seem happy to accept information without wondering where it comes from. It’s really important for university students and professors to question what we know.”

The event is Friday, April 20, at the Columbia Metropolitan Convention Center.  This annual event, which is free and open to the public, is sponsored by the university’s Office of the Vice President for Research.