First-generation student’s accomplishments stack up beyond his dreams

Nick Santamaria admits that he got some funny looks when he told friends and neighbors in New York that he was headed to the University of South Carolina. 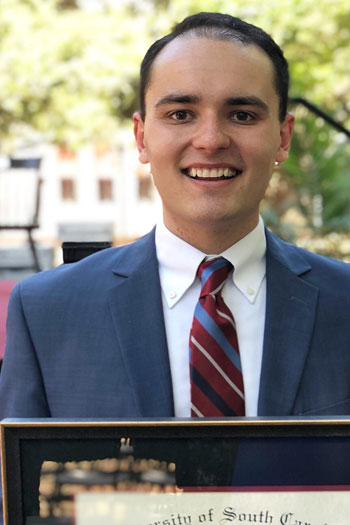 After four years of success at Carolina, it's safe to say that Nick Santamaria hit his stride by coming south for college.

Four years later, he’s getting congratulatory slaps on the back as he winds up an undergraduate experience that’s been fulfilling beyond anything he could have imagined. The Honors College senior is graduating with a degree in political science and a Russian minor with a 3.975 GPA — and the university’s second highest undergraduate student award.

“I’ve been able to do some incredible things,” Santamaria says, pointing to trips to Washington, D.C., to lobby Congress the past two years on behalf of the university and involvement in the Mock Trial Team that twice made it to the national semifinals. He was named a finalist in the national Truman Scholar competition last year and this spring was one of two students to receive Carolina’s Steven N. Swanger Award for leadership and contributions to the university community.

Santamaria says the sideways glances he got just before coming to South Carolina were all about the culture shock people assumed he would experience after leaving Brewster, a village about 65 miles north of New York City. Up to a certain point, those predictions were on target, he says.

“There was some culture shock coming from New York, being so far from home as a first-generation college student and meeting all sorts of different people,” he says. “But I’ve been able to experience life independently in South Carolina, and I think that’s what has made my time here so much fun.”

When he wasn’t on campus, Santamaria served as a special assistant to the office of New York state senator Terrence Murphy and collaborated with “My Brother Vinny” veterans homelessness charity in New York. He was also a death penalty trial intern with the S.C. Commission on Indigent Defense. Leading up to the 2016 elections he was the forum series coordinator of Lead the Way: Voter Registration and Civic Engagement Campaign.

Santamaria completed the research and professional and civic engagement tracks in the Graduation with Leadership Distinction program. The experience of reflecting on his time as an undergraduate has been rewarding, he says.

“I realized I had checked off all these boxes during my time here, but without the GLD process, you don’t sit down and think about the larger lessons of what you’ve done,” he says. “I have taken the time to appreciate all that I’ve done. I’ve figured out how I’ve grown in college — what all of the successes and failures mean and why they matter.”

Santamaria plans to return to New York after graduation but has his sights set on Washington, D.C. “I want to do policy research, lobbying or possibly foreign policy work, maybe in the State Department,” he says.